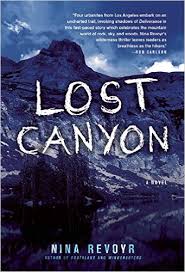 As a lifelong hiker and someone who has back-packed extensively in the Sierra Nevada mountains, I was eager to read a novel that might bring such experiences and that special landscape to life. I wasn’t at all disappointed by Nina Revoyr’s Lost Canyon, but it certainly didn’t trace any sort of trail I’ve ever traveled. A small group of urban dwellers from Los Angeles plan a four-day trek. Their instructor at the local fitness center, Tracy, is the only one with any mountaineering experience. Todd drudges for a high-powered law firm, Oscar struggles to sell real estate in a down market, and Gwen works with underprivileged children. Each is somewhat dissatisfied by his or her current situation, and each hopes the mountain getaway will bring some clarity.

When they arrive at the trailhead, a forest fire blocks their chosen trail. And that’s when the novel takes a detour. Inexplicably, a ranger recommends an alternative route in a different direction, gives them a hand-drawn map, and sends them off on an unmaintained trail. Convincing her cohorts that finding their way will be easy,Tracy optimistically leads them on. The first day goes well enough, although Todd, Oscar, and Gwen are exhausted. Day two, however, brings trouble. When they take a wrong turn and accidentally stumble on a massive marijuana operation, they’re suddenly forced to flee for their lives. Three dog-tired neophytes and their reckless leader, hiking cross-country, trying to avoid the bad guys. A dire situation indeed.

And not totally realistic. First, I’ve never met a ranger who would send mapless, inexperienced hikers off on an unmarked trail. Second, the marijuana operations make a kind of twenty-first century sense, but the ensuing machinations seemed bizarre. The captures and escapes and recaptures were fortuitous; the hikers’ fortitude, downright miraculous. A willing suspension of disbelief is, I believe, essential when reading Lost Canyon.

That said, Revoyr’s novel is a very good read. She writes with a keen eye for the scenery, successfully capturing, I think, the awe that new hikers might feel when seeing the Sierra for the first time. Lost Canyon is fast-paced, with prose rhythms that match the ups and downs of cross-country travel. Successful, too, are Revoyr’s characterizations. This very odd assortment of people, who really don’t know each other when the trip begins, bonds as their ordeal progresses. Each finds an inner strength as well, leaving his or her city persona behind while learning to move well beyond perceived limitations. Because alternate chapters take place in the imaginations of Todd, Oscar, and Gwen, the reader gets to know their insecurities, their abilities, their resiliencies, and even their blisters. En route, they personally thrive.

Even though I wasn’t convinced that such an unusual trek might actually occur, I thoroughly enjoyed the characters’ escapades. At times I felt I was hiking right alongside them, crossing rushing streams, panting on the uphill slogs, tentatively stepping across a boulder field, bivouacking under a cloudless sky. Those parts of Lost Canyon are very real, and make Revoyr’s novel a wonderful escape. 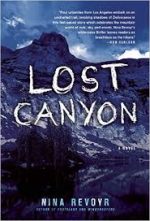 Ann Ronald is a retired English professor from the University of Nevada, Reno. Author of dozens of reviews, she’s also written a number of books about the American West. They include literary studies such as The New West of Edward Abby and Reader of the Purple Sage, cultural studies such as GhostWest and Oh, Give Me a Home, and nature writing such as Earthtones: A Nevada Album. Her latest is a work of fiction, Friendly Fallout 1953. Since retiring, she’s been reading vociferously, so “Bookin’ With Sunny” is giving her a wonderful opportunity to share thoughts about her favorite new discoveries.
More from this reviewer
PrevThe Invention of Nature
Four Seasons in RomeNext