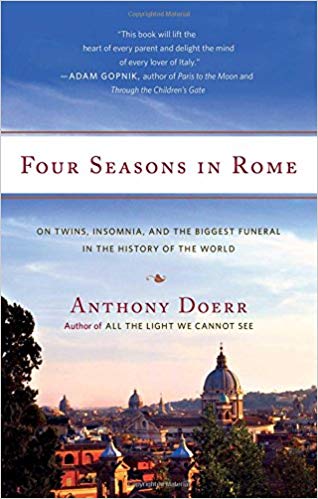 Four Seasons in Rome – On Twins, Insomnia, and the Biggest Funeral in the History of the World

Reportedly, Anthony Doerr took ten years to write his Pulitzer Prize-winning novel, All the Light We Cannot See. He spent one of those years as a fellow at the American Academy in Rome. Accompanying him were his wife and their two tiny twins, barely four months old when the sojourn began. The combination of a new environment, a new language, and a pair of wide-awake baby boys did not serve the novelist well, as he struggled to fictionalize World War II France. However, the problems Doerr encountered did lead him to write Four Seasons in Rome, a charming memoir of that memorable year.

Three themes emerge. The focal point is Rome itself, an ancient city layered in the past. “The bulk of it lies underground,” Doerr writes, “its history ramified so densely under there, ten centuries in every thimbleful.” Often lost amid Rome’s labyrinthine streets, unable to speak the rapid-fire language, Doerr takes refuge in his journal and in his words. “It is the puzzle of Rome that mesmerizes: its patience, its stratigraphy, Tiber mud gumming up from the past wind carrying dust from Africa, rain pulling down ruins, and the accumulated weight of centuries compacting everything tighter, transubstantiating all stones into one.”

Despite his difficulties with Italian, Doerr’s facility with the English language is remarkable. His attentiveness to the craft of writing is noteworthy, too. Throughout Four Seasons in Rome, he writes about various phases of his writing. Wrestling with the unfinished novel will someday be All the Light We Cannot See, he spells out the roadblocks he encounters. Penning journal entries about his experiences in Rome, he plays with imagery and words. And when he decides to write a short story set in Italy, he emphasizes the revision process that will take it from a draft to a finished piece. The following paragraph, I think, profoundly characterizes the differences between genuine artistry and just setting words down on the page.

“A journal entry is for its writer; it helps its writer refine, perceive, and process the world. But a story—a finished piece of writing—is for its reader; it should help its reader refine, perceive, and process the world—the one particular world of the story, which is an invention, a dream. A writer manufactures a dream. And each draft should present a version of that dream that is more precisely rendered and more consistently sustained than the last.”

Alongside Rome and the hard work of writing, Doerr also confronts the chaos of parenting two babies at once. Neither twin seems to sleep at the same time, and insomnia torments their sleep-deprived father. I wonder, in fact, if Doerr ever had a restful night the entire time they spent in Rome. Fortunately, the parents do find a responsible babysitter, and so Anthony and Shauna occasionally are able to foray into the city and nearby countryside unencumbered by baby carriers and countless bottles of milk. Doerr recounts many memorable incidents, such as Owen’s first word (“Ciao”) and Henry’s first step. When Pope John Paul dies and a new pontiff replaces him, the author/father also riffs on mortality and muses about how quickly his sons are growing. “The town sleeps;” a “little heartbeats against mine.”

The subtitle of Four Seasons in Rome states Doerr’s multiple themes less profoundly, perhaps, but does offer a winsome, final take on this very fine memoir. “On Twins, Insomnia, and the Biggest Funeral in the History of the World.” Note the prioritizing order of his words.  – Ann Ronald

Also available by Anthony Doerr: All the Light We Cannot See; The Deep; Memory Wall: Stories; About Grace; The Shell Collector. 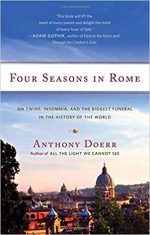 Ann Ronald is a retired English professor from the University of Nevada, Reno. Author of dozens of reviews, she’s also written a number of books about the American West. They include literary studies such as The New West of Edward Abby and Reader of the Purple Sage, cultural studies such as GhostWest and Oh, Give Me a Home, and nature writing such as Earthtones: A Nevada Album. Her latest is a work of fiction, Friendly Fallout 1953. Since retiring, she’s been reading vociferously, so “Bookin’ With Sunny” is giving her a wonderful opportunity to share thoughts about her favorite new discoveries.
More from this reviewer
PrevLost Canyon – Taking the trail less traveled
The Granite MothNext