Home » Reviews » Books on books » Let Me Tell You

Let Me Tell You 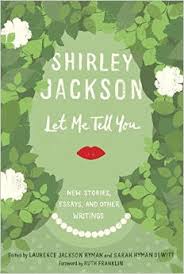 Let Me Tell You: New Stories, Essays and Other Writings

Two of Shirley Jackson’s children have selected a miscellany of their mother’s writings that have never before been collected in one volume. Let Me Tell You gives Shirley Jackson fans more than fifty pieces: essays, talks given at various places, stories, vignettes, fragments, personal and literary musings. Introduced by Jackson scholar Ruth Franklin, the assortment is a must-read for anyone who has ever been fascinated by Hangsaman or “The Lottery” or The Haunting of Hill House or any of Jackson’s many other imaginative quirks. I easily could itemize the contents of Let Me Tell You, and summarize the excerpts, or I could be a quirky writer myself. I choose the latter course.

One essay in Let Me Tell You totally caught my attention and will amuse “Bookin’ with Sunny” aficionados as well. “A Garland of Garlands” is the funniest put-down of book reviewers I’ve ever read! Shirley Jackson was married to Stanley Edgar Hyman, an English professor and literary critic. “My husband writes book reviews for a living, and I would like to enter a protest,” Jackson fires a salvo. “I don’t think I deserved a book reviewer. My mother raised me better.” She then proceeds to outline the trials of being such a wife.

She dismisses her husband’s efforts to condense a five hundred page book into a three-line review. She scoffs at the way he tosses the monstrosity to her, asks her what she thinks, then usurps her ideas. He elaborates, taking her opinions as his own. She makes fun of his favorite words, which reappear in review after review. I was particularly amused by this because I’m continually looking in a thesaurus for new ways to say words like ‘compelling’ or ‘charming’ that I’ve used a hundred times before. “Who, for instance,” writes Jackson, “ever heard of someone calling a book just ‘good?’ If a book is good, it is ‘eminently readable.’” She further explains how her own reviewer is particularly attached to the word ‘heartrending,’ “along with ‘delectable’ and, to a lesser extent, ‘invidious (which he cannot distinguish from ‘insidious’) and ‘bailiwick.’” Then Jackson mocks her husband’s style, imagining sentences and reviews starring Cedric, “an invidious cad,” and the “delectable character of Rosita.” At this point in her essay, I was laughing out loud.

Next, she moves on to the illusions of authorial grandeur held by her book reviewer, who of course imagines he is a better word-smith than those authors whose books he reads and reviews. He becomes the “poet-reviewer,” a stylist, and a man who deserves better than two cents per word. Finally, she announces the wife’s biggest problem, the books themselves. “Whether she sells them or whether she sends them to the library or whether she gives them to her kid sister, they pile up in the bookcases, in packing boxes, in the corner of the living room, all incredibly pathetic in their bright shiny dust jackets, all called ‘The Novel of the Year’ or ‘The New Sinclair Lewis’ or ‘The Finest Piece of Work This Young Author Has Yet Done.’” Anyone who has been to Sunny’s lair, where “Bookin’ with Sunny” books amass, will know the truth of Jackson’s observation.

The rest of Let Me Tell You is just as personable, just as quixotic, just as astute. Some of the fragments and stories are dated, some will seem almost archaic to today’s readers. But Jackson’s comments on literature, on her own work habits and on her husband’s career, hit the literary bull’s eye. Let Me Tell You is ‘eminently readable,’ a ‘delectable’ addition to Jackson’s ‘bailiwick,’ a ‘compelling’ and ‘charming’ book for sure. – Ann Ronald

Also available by Shirley Jackson: The Lottery; The haunting of Hill House; We Have Always Lived in the Castle; Life among the Savages; The Lottery and Other Stories; The Sundial; The Road Through the Wall; Just an Ordinary Day; Come Along with Me; The Tooth; Hangsaman. 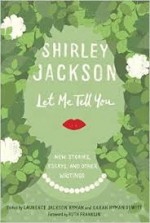 Ann Ronald is a retired English professor from the University of Nevada, Reno. Author of dozens of reviews, she’s also written a number of books about the American West. They include literary studies such as The New West of Edward Abby and Reader of the Purple Sage, cultural studies such as GhostWest and Oh, Give Me a Home, and nature writing such as Earthtones: A Nevada Album. Her latest is a work of fiction, Friendly Fallout 1953. Since retiring, she’s been reading vociferously, so “Bookin’ With Sunny” is giving her a wonderful opportunity to share thoughts about her favorite new discoveries.
More from this reviewer
PrevThe Age of Miracles
TallgrassNext