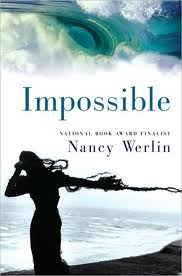 This book is impossible to put down, no pun intended.

Nancy Werlin, National Book Award Finalist, pulls readers into the fast-moving currents of a modern fairy tale. Based on verses from The Elfin Knight, an early version of Scarborough Fair, Impossible reveals the sinister nuances of an ancient ballad.

At the age of seven, Lucy Scarborough discovers a letter hidden in her bedroom. Barely able to read, she sounds out one sentence: “I look in the mirror now and see my mother and I am so afraid you will end like us: doomed, cursed…all sorts of melodramatic, ridiculous, but true things.” Lucy would ask her foster parents Leo and Soledad for help deciphering it all, but she doesn’t want an explanation. She wants it to be magic.

Ten years later, Werlin’s heroine is no longer the whimsical girl she used to be. Lucy is practical in all aspects of life, especially love. She’s certain that everything is under control when she goes to her prom with Gray Spencer, a boy “she could fight any day, and win.”

In spite of precautions, events spiral out of Lucy’s control: “It wasn’t Gray Spencer at all. That made no sense, but Lucy felt the truth of it in her bones. It was someone else, using his body.” An ironic twist leaves Lucy dealing with the impact of rape and teenage pregnancy, and the last thing she needs is to discover a curse that has passed down from one Scarborough girl to the next: she must fulfill three impossible demands of the Elfin Knight’s ballad, or fall victim to madness upon her daughter’s birth. What sets Lucy apart from her ancestors is the support of her devoted foster parents and Zach, her childhood friend who goes beyond the call of duty. Will it be enough?

There is not a lull in the plot as Lucy, Zach, Leo and Soledad struggle against time to break an age-old curse. This tale isn’t just about a checklist of magical chores. More miraculous than the impossible feats is the transformation of each character, underscored by Werlin’s poignant prose: “I understand now…You were afraid, like I am, but you did everything you could for me anyway.”

In Impossible, the story of innocence betrayed and love that fights back, the lyrics of Scarborough Fair take on a dark, powerful magic. But who’s to say that songs can’t be re-written?               -J.M.

Joanne Mallari holds a BA in English (Writing) with a minor in Spanish from the University of Nevada, Reno. She currently teaches preschool at St. John’s Children’s Center. Her interests include poetry, shower recitals, and dancing at random. Joanne lives in Reno, NV.
More from this reviewer
PrevThe Glen Canyon Country
HeartbrokenNext