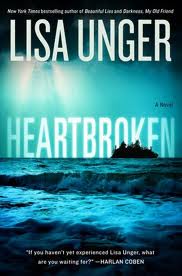 Lisa Unger’s latest novel, Heartbroken, reminds me of another one I reviewed for ‘Bookin’with Sunny’ a few months ago. Both Tatiana de Rosnay’s A Secret Kept (in France) and Heartbroken (in the Adirondacks) take adults back to a particular scene from their childhood, a distant island where memorable family summer vacations occurred. While there, they begin to recall more and more past events, especially past traumas and past indiscretions. Before long, the, present and the future blur together with their recollections, as familial dynamics repeat themselves with surprising new twists and turns. Where A Secret Kept was more like a dreamscape, however, Heartbroken is more like a nightmare. Instead of slowly unfolding, the Heartbroken past literally bursts into flame, searing every character left standing at the end of the tale.

In truth, I’m not sure I liked all those characters. I wanted to shake a couple of them, wanted to sit them down and say “why on earth are you doing this?” And yet, their devastating decisions accurately reflect their flawed personalities and their impossible situations. Unger does a superb job of digging deeply. “Everyone wore one face,” she writes, “told one story of themselves, and then underneath was a whole other life, a rushing current of secret pains and buried shames, ugly truths.” Unger’s ultimate goal is to salvage what’s rushing and gushing below. At the same time, she generates an urgency that literally made me turn the pages faster and faster. Heartbroken’s present turns out to be filled with such immediate problems that, for a while, the past fades from consciousness. Then it resurfaces, running parallel to what is happening in the here and now.

Ordered by their mother to do so, Kate and her brother make the trek back to the island every single year. This time, however, things are different. Her brother flatly refuses to go along. Her husband and son are delayed, so Kate and her daughter (along with her daughter’s best friend, the first time an outlier has joined the summer reunion) arrive on the island to visit the family matriarch without moral support. Kate’s father has opted out, too, so the four women are on Heart Island alone. Not alone, as it turns out, not alone at all. Their sanctuary, and I use that word loosely, is shattered by outside intruders. At the same time, Kate’s mother’s safe haven is being emotionally as well as physically shattered, for Kate has been reading letters and diaries about Heart Island’s past. Like an iceberg, and like Kate’s icy mother, this island has a lot of secret bulk hidden underneath the water. Lisa Unger’s goal in Heartbroken is to expose those thawing generational currents of pain and shame, “the ugly truths”.      -A.R.

The following titles by Unger are unreviewed but also available: Beautiful Lies, Black Out, Die for You, Sliver of Truth, Darkness My Old Friend, Fragile, Angel Fire, The Darkness Gathers, Smoke, and Twice.

Ann Ronald is a retired English professor from the University of Nevada, Reno. Author of dozens of reviews, she’s also written a number of books about the American West. They include literary studies such as The New West of Edward Abby and Reader of the Purple Sage, cultural studies such as GhostWest and Oh, Give Me a Home, and nature writing such as Earthtones: A Nevada Album. Her latest is a work of fiction, Friendly Fallout 1953. Since retiring, she’s been reading vociferously, so “Bookin’ With Sunny” is giving her a wonderful opportunity to share thoughts about her favorite new discoveries.
More from this reviewer
PrevImpossible
Woodsmoke, Wind, and the PeregrineNext