Home » Reviews » Fiction » How to be a Good Wife

How to be a Good Wife 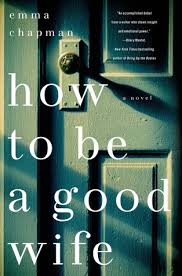 How to Be a Good Wife,  Emma Chapman’s chillingly captivating debut novel, begins with a statement by narrator Marta Bjornstad: “Today, somehow, I am a smoker.” Her husband Hector “hates” smoking, but Marta finds herself (as if awakening) with a lighted cigarette in her hand and the smell of tobacco everywhere. But what is she waking from?

Marta and Hector have one grown son, Kylan, who has recently graduated from university and left their village home for the city. Hector loves the village of his birth, but Marta, never completely at home there, feels increasingly isolated without her son. The village, located in an unidentified Scandinavian country, intensifies Marta’s feeling of dislocation.

The heart of this story is Marta’s scary subservience to Hector. There are only four major characters: Marta, Hector, Kylan and Hector’s intrusive mother, Matilda. Throughout the novel, aphorisms from Matilda’s wedding gift to Marta, a book called “How to Be a Good Wife,” haunt its pages. Early on, we read: “Make your home a place of peace and order.” As hard as Marta tries to keep her home exactly as Hector demands, she seems destined to fail. Something is not right.

The story is deceptively simple. Marta, emotionally damaged by her parent’s deaths when she was eighteen, meets Hector and they marry. Chapman presents the reader with three versions of their meeting, all having in common Marta’s distress and Hector’s role as rescuer and then as husband and caretaker. The “care” includes Marta’s taking a daily pill that, according to Hector, will insure for her a sense of balance. She has been mindfully taking the pills for years, hoping to fulfill more words from her mother-in-law’s gift, “How to Be a Good Wife.” Marta finds it increasingly difficult to  “Remember always to be bright and cheerful: a breath of fresh air”.

With Kylan gone, Marta begins to fake her pill taking. Without them, she experience hallucinations – smells, voices, visions of a young girl, unknown, but strangely familiar. Hector wants her to try new medications, but she refuses. “Catering to his comfort will give you an immense sense of personal satisfaction”  now seems impossible.

We are drawn into this domestic tale despite a growing lack of sympathy for any of the characters. Marta’s isolation becomes dangerously destructive when Kylan brings his fiancée home to meet his family. Marta, slipping further, creates an evening in which havoc reigns. By this time, we are horrified but hooked. What in the world is causing this woman to sabotage her every human connection?

The visions of the young girl continue, only now the girl calls her by name: Elise, not Marta. She repeatedly cries out, “Help me.” One day when Hector is visiting his mother, the girl takes Marta to a hidden space under her house and shows her something she cannot turn away from. Hallucination or repressed memory? For years Hector has told her that to travel beyond their village is unsafe. At this point in the story, Chapman picks up the pace with a scene of Marta quickly packing, leaving her wedding band behind, and pulling away from the house just as Hector returns. Marta’s escape is critical.

Marta does escape, but confusion reigns until the very end and, although the ending may disappoint some, for this reader it confirms Chapman’s skill at writing a novel that is both prophetic and ironic. How to be a Good Wife is a domestic thriller not to be missed   – Sunny Solomon 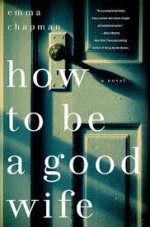 Sunny Solomon holds an MA in English/Creative Writing, San Francisco State University. She is a book reviewer for “The Clayton Pioneer” and her poetry and other writing has been published in literary journals, one chapbook, In the Company of Hope and the collection, Six Poets Sixty-six Poems. She was the happy manager of Bonanza Books, Clayton, CA and Clayton Books, Clayton, CA. She continues to moderate a thriving book club that survived the closure of the store from which it began. Sunny currently lives next to the Truckee in Reno, NV.
More from this reviewer
PrevThe Bishop’s Wife
Phantom NoiseNext