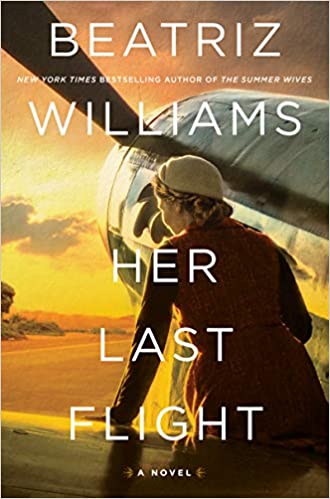 Her Last Flight – Beatriz Williams, once again, takes her creative imagination to new heights in this historical novel of women and aviation.

I have read several Beatriz Williams’ novels and have always enjoyed them. I think Her Last Flight is Williams’ very best! It shows off her creative imagination and her ingenuity in sparkling innovative ways. When I began Her Last Flight, I expected to read a fictional take-off on Amelia Earhart’s disappearance. Instead, I found a story that takes a (a, not the) famous aviatrix to entirely new heights.

Williams’ heroine, Irene Lindquist, was a renowned female pilot in the late 1920s, early 1930s. Her background resembles Earhart’s, in that both had alcoholic fathers and both designed backyard roller coasters for thrills long before they were old enough to fly. Earhart was a Midwesterner, however, whereas Irene’s California childhood was much more free-spirited. At an early age, Irene’s father taught her to surf, a passion that thrills her throughout her life.

Even so, both women were addicted to flying. Some of the best passages in Her Last Flight take place in Irene’s head and I could well imagine Earhart contemplating the same passions. Irene simply loves being in the air. She thrives on the navigating challenges and on the adrenalin highs and the mechanics of flight. She doesn’t, however, love the accolades and the attention. I thought Williams did a particularly fine job of describing Irene’s doubts about fame and fortune, her horror at being paraded in front of adoring crowds, and her agony whenever she needed to make a public speech. I don’t know if this mirrors Earhart’s persona, but it sounds reasonable. And it makes Irene into a multi-faceted, multi-dimensional character.

It doesn’t make Irene into an Earhart clone. Williams devises several major schematic differences. I’ll give two examples, though there are many others throughout the novel. Earhart’s last flight took place over the South Pacific; Irene’s, during an air race while circumnavigating the globe, after she left Alexandria heading for Casablanca. And of course, the biggest difference of all is the fact that the reader knows Irene’s fate from the beginning of Her Last Flight, whereas we still don’t know the answers to the mystery behind Earhart’s final disappearance.

Her Last Flight begins when a photojournalist arrives on Irene’s Hawaiian doorstep in 1947. The young woman, Janey, is writing a biography of another famous aviator, Sam Mallory, who joined with Irene on a famous and glamorous 1928 trans-Pacific flight from California to Australia. Sam and Irene were linked romantically in the early years, though no one knew for sure. While Irene continued her air racing adventures, they went separate directions. Sam left barnstorming and later became a hero of the Spanish Revolution. Janey, in possession of his diary, wants to tell his story and, in tandem, the story of Irene.

How she tracks the aviatrix down is part of Her Last Flight’s mystery, but the novel opens with their initial encounter. From that point on, the novel moves back and forth from Irene’s decade of fame to Janey’s interviews with Irene. This design offers unique perspectives on Irene’s story: as it was happening, as Irene recalls it, and as Janey reimagines it. Like I said at the outset, Williams deserves a great deal of credit for the way she takes the bare bones of an aviatrix’s story and fleshes it into a complicated, highly original narrative.

Williams also has a lot to say about the role of women in the early aviation years. Janey, as a photojournalist who has just covered some gruesome World War II scenes, encountered the same kind of gender pigeon-holing, so her conversations with Irene will hold much interest to women of today. Further, those conversations tiptoe around unacknowledged indiscretions. The two personalities are more alike than they would like to admit. They are like many of their would-be readers, too? I can’t recommend Her Last Flight highly enough to anyone who wants, both intellectually and emotionally, to soar. –  Ann Ronald

Also available by Beatriz Williams: A Hundred Summers; The Summer Wives; The Golden Hour; The Secret Life of Violet Grant; The Glass Ocean; Along the Infinite Sea; A Certain Kind of Novel; The Wicked City; All the Ways We Said Goodbye; The Wicked Redhead; Overseas; The House on Cocoa Beach; An American Airman in Paris. 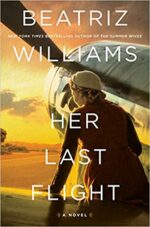 Ann Ronald is a retired English professor from the University of Nevada, Reno. Author of dozens of reviews, she’s also written a number of books about the American West. They include literary studies such as The New West of Edward Abby and Reader of the Purple Sage, cultural studies such as GhostWest and Oh, Give Me a Home, and nature writing such as Earthtones: A Nevada Album. Her latest is a work of fiction, Friendly Fallout 1953. Since retiring, she’s been reading vociferously, so “Bookin’ With Sunny” is giving her a wonderful opportunity to share thoughts about her favorite new discoveries.
More from this reviewer
PrevI Saw A Man
The Last House on The StreetNext