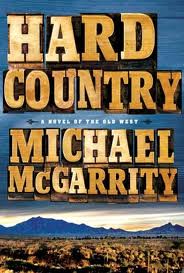 New Mexico author Michael McGarrity has written a dozen mysteries featuring retired Santa Fe detective Kevin Kerney. His two most recent novels, Hard Country and Backlands, backtrack in time and trace Kerney’s family heritage. The saga begins with John Kerney, a west Texas rancher whose life is turned upside down in the first few pages of Hard Country. After a number of adventures that take him throughout the southwest, John ends up in New Mexico, where he settles near the Tularosa. That ranch will subsequently anchor generations of Kerney men and their wives, their loves, and their children.

Hard Country takes the Kerney family from post-Civil War times through the Spanish American War and on to World War I. Backlands picks up where Hard Country leaves off, beginning just as World War I is drawing to a close and continuing until the middle of World War II. An as yet unnamed and unpublished third novel will eventually complete the Kerney trilogy, concluding the family history (I assume) with Kevin Kerney on the Tularosa.

For several reasons, I recommend McGarrity’s novels. The mysteries are well-reasoned, with convincingly–drawn story lines, colorful characters, and careful attention to New Mexico landscape and lore. The same is true of the two historical epics. McGarrity weaves a lot of factual information into his stories, including real-life characters who populated the Land of Enchantment at one time or another. Men like Billy the Kid and cartoonist Bill Mauldin appear, as do many lesser-known figures. They come and go seamlessly, an integral part of the story McGarrity is telling.

Historical events enter the novels seamlessly, too. One Kerney male or another (and sometimes more than one) fights in every major American war, and other American crises affect their lives, too. Cyclical droughts recur. The Stock Market crash, followed by the Great Depression, touch Kerney savings and prosperity. A New Mexico tuberculosis sanitarium plays a prominent role in one of the novels, as does the Civilian Conservation Corps. McGarrity obviously researched his information carefully, so the reader learns a lot. McGarrity even points the reader toward further readings in two detailed Author’s Notes.

I’ve read a lot of books—both history and fiction–about the American West, I’ve spent a fair amount of time in New Mexico, and I found both Hard Country and Backlands to be pitch perfect. The language rings true, the colloquialisms are authentic, the action is described accurately. The New Mexico scenery is rendered with a perceptive eye and with genuine affection. If the Kerney men have anything in common, it is their love for their land, an affinity I’m sure their author shares.

Anyone who enjoys in-depth historical fiction will love to immerse themselves in Hard Country and Backlands. Both books are long, and cover a lot of territory. As I read, I often wished the story line would slow down even more. But a few pages later I’d want the action to speed up, to get on to the next episodic crisis. Too many deaths? Perhaps, but any saga covering multiple generations necessarily portrays death, time and again. I love the Kerney men, each and every one, even their flaws and their imperfections. They’re genuine westerners, through and through. So of course I love their stories, told so strikingly by Michael McGarrity.   – Ann Ronald 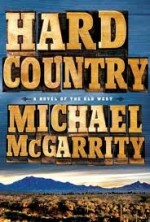 Ann Ronald is a retired English professor from the University of Nevada, Reno. Author of dozens of reviews, she’s also written a number of books about the American West. They include literary studies such as The New West of Edward Abby and Reader of the Purple Sage, cultural studies such as GhostWest and Oh, Give Me a Home, and nature writing such as Earthtones: A Nevada Album. Her latest is a work of fiction, Friendly Fallout 1953. Since retiring, she’s been reading vociferously, so “Bookin’ With Sunny” is giving her a wonderful opportunity to share thoughts about her favorite new discoveries.
More from this reviewer
PrevThe Bear
Those Angry DaysNext