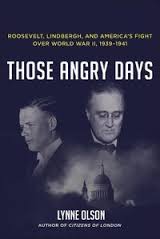 In April 1939 Charles Lindbergh strode into FDR’s White House Office. The two had never before met. The meeting lasted thirty-eight minutes. Arguably, they were the two most famous Americans of the time. Not arguably, they disagreed about most of the current grand public issues, particularly those having to do with national preparedness and foreign policy. Lindbergh, thirty-seven and a political ingénue, seemed charmed by FDR, fifty-seven and a political master, but both were adamant about being in control and getting their own way. Olson leaves unresolved who was the unrelenting force, who the immovable object. During this conversation, no meeting of the minds occurred however affable the banter.

As much as Angry Days is about these two towering personalities, it is about much more besides. Olson’s major task in Angry Days, one of many books she has written about the period of World War II, is to explain how America overcame its deep reluctance to entering another European conflict, a reluctance built both on its disillusionment following World War I and the staggering impact on the American Dream of the Great Depression. Olson creates an artfully designed and engaging tapestry that weaves crucial events from before 1939 with those that happened after 1941.

The fight over America’s resonant isolationism and entry into World War II cannot be reduced to a conflict of personalities—FDR vs. Lindbergh—nor does Olson suggest that it can be. Instead, she uses these two charismatic heroes as large canopies under which she gathers other personalities, historical trends, economic burdens and Congressional politics. Still, the conflict between Lindbergh and FDR became personal, public, and bitter.

Famously, FDR is known as a political poker player but one determined to be the winner at the game’s end not necessarily the winner of the current hand. He was subtle, strategic, and enigmatic while sporting his famous smile and jaunty-angled cigarette holder. In Olsen’s telling, however, it is Lindbergh who comes across as more mysterious and unknowable, and how! His wife, Anne Morrow Lindbergh, could not account for his rigid beliefs accommodating if not capitulating to the Nazis’ megalomania, beliefs modified only slightly after December 7, 1941. Although Anne remained a publicly dutiful wife, she was, privately, increasingly distressed by his almost fanatical commitment to Nazi Germany. She was particularly disturbed about his public expressions of anti-Semitism. Her attempts to engage him in rational discussion met with rejection.

While Olson portrays Lindbergh as someone completely opposed to any American involvement in European politics that might be construed as limiting German options, she does not paint FDR as the opposite—someone who was determined to bring the US into the war on the side of Britain. In short, Olson is not a conspiracy theorist. She carefully charts US policy as the result of economic, military, political, and philosophical concerns that were sifted through America’s complex political institutions and the mind and heart of FDR. His beliefs, as nearly as we can discern them, shifted slowly over the years

The first milestone was his embrace of army and navy preparedness in 1938 and 1939. The US Army was the 18th largest in the world in 1938, ready perhaps if Canada had decided to re-open the war of 1812 without tanks and airplanes. Under intense lobbying from the Army and Navy leadership, FDR reluctantly agreed to a limited conscription act and building a two-ocean navy in 1940. Nevertheless, as Olson argues, FDR rejected demands from highly influential American leaders to declare war on Germany. Japan was of concern, too. Japanese actions in Asia slowly focused American foreign policy radar in the region. As the specter of a possible two-ocean war arose, FDR’s preparedness agenda accelerated, a response to events not the next step in a Machiavellian plan to join the war.   – Neal Ferguson

Also available by Lynne Olson: Citizens of London; A Question of Honor: The Koseiuszko Squadron (with Stanley Cloud): Forgotten Heroes of World War II; Troublesome Young Men, the Rebels Who Brought Churchill to Power and Saved England; The Murrow Boys, Pioneers in Broadcast Journalism; Freedom’s Daughters: The Unsung Heroines of the Civil Rights Movement from 1830 to 1970; 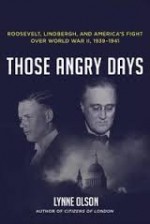 Neal Ferguson is a self described Anglo-phile. After studying for a PhD in British history and doing research for a year in various British archives, he came to the University of Nevada in 1970 to teach. Soon he found himself in administration where he remained until 2003. After returning to full-time teaching a decade ago, he decided to concentrate his teaching energies on Medieval British history and various global aspects of World War II. Dedicated to Ambrose Bierce’s proclamation that the purpose of war is to teach Americans geography, Neal insists that his students accompany him (in class) to sundry east European rivers and steppes, African deserts and jungles, south-east Asian mountain ranges and peninsulas, and small islands and coral reefs in the Pacific. Currently he is writing a book about the ups and downs of General Douglas MacArthur’s military reputation.
More from this reviewer
PrevHard Country and Backlands
Great Ghost StoriesNext