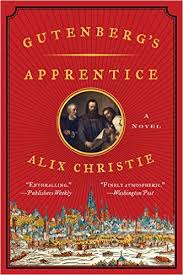 While it is difficult to overemphasize the importance of moveable type and Gutenberg’s impact on the creation of the modern world, letterpress printing (what moveable type printing is now called) is an aspect of the world we have lost. No longer a part of international business and commerce, it is now an art form and parent to linguistic oddities—out of sorts, mind your p’s and q’s, get the lead out, dingbat, and underscore. As an advanced technology, letterpress printing began going the way of the horse and buggy at about the same time. Now our computers churn out Garamond, Times New Roman, Arial, and hundreds of other typefaces having historical antecedents in some cases back to the 1450s. Letterpress printing is relegated to art studios and a few publishing ventures such as the Black Rock Press at the University of Nevada, Reno.

Alix Christie’s historical novel gives center stage to Gutenberg’s actual apprentice and protagonist Peter Schoeffer. Haven’t heard of Peter Schoeffer? It’s not surprising because most conventional history texts tell the story of printing in about a half-page, progressing from monks laboriously hand lettering and illuminating books on sheepskin to the Gutenberg Bible and the Print Revolution. Not much else is mentioned. This is understandable because to describe printing and its impact on culture, commerce, religion, education, learning, and politics requires the writer either to write a half page summary or a four-hundred page book. Or, in this case, Christie writes a four-hundred page historical novel.

In keeping with the world we have lost idea, there is a profound sadness, and perhaps even guilt, that permeates Peter Schoeffer’s life in Gutenberg’s Apprentice. This young man is a remarkably gifted calligrapher whose hand-lettered books promise to make him famous. He is delivered without consent, however, into Gutenberg’s workshop as an apprentice working on the evolving technology that will soon reduce his beloved calligraphy to an art form similar to the impact of digital technology on letterpress printing. His father, an investor in Gutenberg’s startup is not a silent one.  He expects Peter both to learn the trade and to keep him informed about Gutenberg, a recognized genius who has neither the time nor the temperament to worry about trivial matters including budgets.

In part, Peter is saved by his love of letters’ shapes and flow, the same love that helped propel his success as a calligrapher. In his new situation, his talents with pen, nib, and ink are slowly translated into a new application.  As moveable type printing evolved, the metal typefaces didn’t necessarily capture the desired aesthetics of hand lettering. Peter bridges the gap by becoming a typeface designer whose fonts, when turned into metal, are things of beauty. Eventually, Peter Schoeffer will discover that he has design talents, but he also has business talents. He is his father’s son after all. Peter will establish a fabulously successful printing business during the first fifty years of this new industry. Still, Peter has some lingering regrets as he ponders what he has helped to bring about.

Alix Christie, in her debut novel, gives the reader some fully formed characters — Peter, his father, Gutenberg, Peter’s fiancé — in addition to weaving a complex, compelling story about them.  She alternates chapters about Peter’s life thirty years later with ones about his stormy apprenticeship and the production of the Gutenberg Bible. Also, for those of us who enjoy learning about the details of a craft, she delves into the specifics of how ink was made, how the exacting proportions of ingredients in metal type came about, how fonts were designed, cut, and forged into metal, and a dozen other details of letterpress printing. Having been at one time a letterpress printer herself in San Francisco, Christie’s plausibility in the novel is enhanced by her hands-on experiences as she describes the sights, smells, and noise of Gutenberg’s pressroom.   – Neal Ferguson 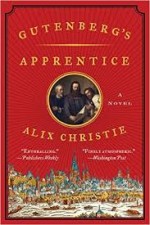 Neal Ferguson is a self described Anglo-phile. After studying for a PhD in British history and doing research for a year in various British archives, he came to the University of Nevada in 1970 to teach. Soon he found himself in administration where he remained until 2003. After returning to full-time teaching a decade ago, he decided to concentrate his teaching energies on Medieval British history and various global aspects of World War II. Dedicated to Ambrose Bierce’s proclamation that the purpose of war is to teach Americans geography, Neal insists that his students accompany him (in class) to sundry east European rivers and steppes, African deserts and jungles, south-east Asian mountain ranges and peninsulas, and small islands and coral reefs in the Pacific. Currently he is writing a book about the ups and downs of General Douglas MacArthur’s military reputation.
More from this reviewer
PrevWhen in Rome – Pope Francis Among the Wolves
The Hours CountNext