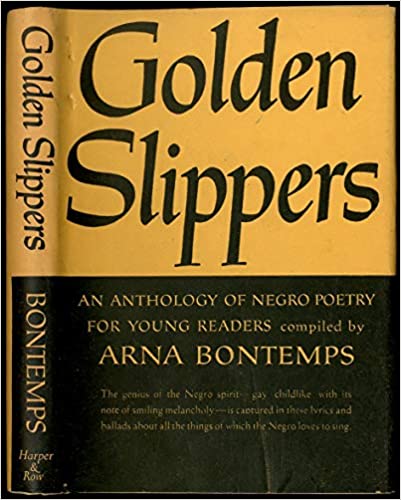 Langston Hughes – A poet for BLM?

GOLDEN SLIPPERS: An Anthology of Negro Poetry for Young Readers

We have tomorrow
Bright before us
Like a flame.

And dawn-today
Broad arch above the road we came.

The other day, while rearranging my bookshelves, I ran across Golden Slippers. What sort of “Negro Poetry” was compiled for young readers in 1941, I wondered? And who were the poets Arna Bontemps chose? I was familiar with a few, Dunbar, McKay, Johnson, Cullen, Bontemps, and, of course, Langston Hughes.

I turned to my reading chair, sat down, and began looking through the book. It was a Friday afternoon, the 8th of January, with the events of the 6th still casting their shadow, causing me to read more slowly. The book was published in 1941; it had to have been before December 7th of that year. I don’t know when Hughes wrote the poem Youth or what he might have had in mind when he wrote it.

I picked Youth because it made me wonder what the poet would have thought about the youth in 2020? The African American youth, the Black youth, his Negro youth? I was taken by the poem’s future: “We have tomorrow/Bright before us” and then its past: “Yesterday/A night-gone thing,” followed by its present: “And dawn-today/Broad arch above the road we came” and by the time I read the words, “We march!” I could see every BLM event, month after month, that had taken place in 2020. Knowing that Hughes did not participate in MLK’s March 9, 1965, Selma march, I wondered what he was thinking when he wrote the words “We march!” I’m currently reading Rampersad’s two-volume biography of Hughes, discovering a complex man, a poet, novelist, essayist, lyricist, national treasure.

The book itself also interests me greatly. It’s my personal belief that all the inclusive books now rushing into publication will do little to lessen the racism that continues to exist in the U.S. if not read by white Americans and especially young Americans. We can pass all the Civil Rights laws we want, but if racism is something most white families cannot talk about to their children, racism will continue to survive despite whatever laws are passed.

My copy of Golden Slippers was bought at a used bookstore. I am an amateur book collector, so buying the occasional ex-library book doesn’t bother me, and in this case, it was the reason I bought it. A library book’s life says almost as much about our American culture as it does about its content. My Golden Slippers came from the Minneapolis Public Schools, 1968. A stamp on the back of the front book cover says it was part of a “Workshop – Indian & Negro Heritage.” The library pocket is pasted on the inside of the back cover, with the words, Minneapolis Public Schools/Task Force/Minority Cultures. The library card is still in the pocket. The library card is empty. I don’t know when the library got rid of the book as it has no discarded stamp. Ten years, unread, on a library shelf is an average life span. Since that time, it was purchased by a woman from Fresno, California. She must have valued the book because she stuck her address stamp on the book’s front and back. I bought the book in Reno, Nevada, and after a little searching, I found that the woman from Fresno ended up as an educator in Las Vegas, Nevada. Golden Slippers is valued once again.

I wrote a piece, Black History Month 2019, which included some words about another ex-library book I bought at a Friends of the Library book sale: We Are One, The Story of Bayard Rustin. It came to the Washoe Co. Library in 2008 and was discarded in 2018. It did not have a library pocket, and the borrower card that would have gone into the pocket was pasted onto the free endpaper. The card was empty. In its ten years on the library shelf, not one person, student or adult, ever borrowed it.

That brings me back to Golden Slippers and my belief that racism needs to be struck down before our children ever get to school. I have no doubt that in the coming years there will be more books by and about African Americans on our library shelves and that African American parents will have no trouble finding them. Still, we desperately need these books in the hands of white American children—and their parents.  – Sunny Solomon

Golden Slippers is out of print and available only as a used book. It is not available through Bookshop.org.