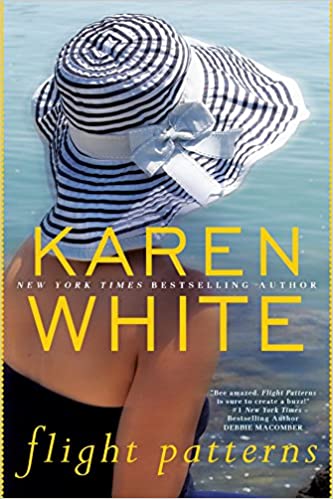 When I was about a quarter of the way through reading Karen White’s novel, Flight Patterns, I decided I’d review it by borrowing a term used by an RT Book Reviews reviewer that’s quoted on Flight Patterns’ first page. “Southern Gothic.” It’s a term often used to describe William Faulkner’s novels or Flannery O’Connor’s short stories and involves eccentric characters, mysterious Southern settings where the past overshadows the present and darkened evil overtones of alienation and angst. As I read more of Flight Patterns, however, I realized White’s novel is just the opposite. Her eccentric and emotionally damaged characters are emerging from their dark shadows, finding their individual “flight patterns” as it were.

Two estranged sisters, Georgia and Maisie, plus their mother, who hasn’t spoken a word for years, narrate the action from a kaleidoscope of shifting points of view. Georgia and their mother, Birdie, describe events in the first person, although Birdie’s observations—locked inside her brain—are more ephemeral than explicit. Maisie’s chapters are told in the third person, which holds her at arm’s length more than the other two, and which fits her role in the novel—and in the family—as well.

Georgia lives in New Orleans and hasn’t been home in a decade. When her job as an antiques appraiser leads her back to Apalachicola, Florida, the “flight patterns” are set in motion. Accompanying her is the man who hired her. They’re looking for a distinctive piece of china that Georgia once saw in her mother’s closet. Its unique bee pattern matches a set of Limoge china that James Graf’s family has inherited from their grandmother’s estate. It’s up to Georgia to determine the value of that set, preliminary to appraising the entire Graf estate. So she returns to the scenes of her childhood, to her mentally damaged mother, to her ninety-three-year-old grandfather who essentially raised the two sisters, and to Maisie, who ten years earlier made Georgia promise to stay away from Apalachicola forever.

Make no mistake, Flight Patterns is a powerful novel, deeply informed by family grievances and unspoken secrets. Karen White holds all the mystery together with an extended metaphor that resurfaces on page after page. Her novel begins in 1943. A beekeeper in France, hearing the arrival of German tanks and trucks, leaves his beloved daughter with neighbors where he hopes she will be safe. Georgia and Maisie’s grandfather is a beekeeper, too. He has kept a journal for years, and each chapter of Flight Patterns begins with an excerpt from that journal, either quoting someone who has written about bees or describing a particular habit of bees. Moreover, each chapter’s content echoes its introductory excerpt.

To successfully extend this metaphor for four hundred pages is a mark of extraordinary talent. And that extension never feels heavy-handed. Rather, the bees are an integral part of White’s story—as they figure on the pieces of the china and as they mark the progress of the plot. Each of the characters is pursuing his or her own pattern of flight, fleeing from uncomfortable memories or refusing to acknowledge an increasingly awkward present. Each has a role to play, too, just as each bee has a predetermined fate. White weaves the human “flight patterns” with the bees’ in really creative ways. Those patterns, however, flutter free from Southern Gothic long before the novel’s end. Damaged characters, to be sure, and a deadly damaged past. But just as new queens swarm and generate new hives, so the sisters and the rest of their family generate new “flight patterns” for themselves and for their futures. – Ann Ronald

Also available by Karen White: The Last Night in London; Dreams of Falling; The Night the Lights Went Out; In the Shadow of the Moon; Whispers of Goodbye; Spinning the Moon; The Sound of Glass; A Long Time Gone; The Time Between; After the Rain; Sea Change; The Beach Trees; Falling Home; On Folly Beach; The Lost Hours; The Memory of Water; Learning to Breath; Pieces of the Heart; The Color of Light; The Tradd Street Series (seven books); Blessings of Mossy Creek. 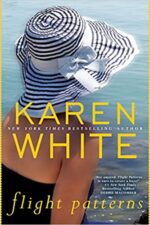 Ann Ronald is a retired English professor from the University of Nevada, Reno. Author of dozens of reviews, she’s also written a number of books about the American West. They include literary studies such as The New West of Edward Abby and Reader of the Purple Sage, cultural studies such as GhostWest and Oh, Give Me a Home, and nature writing such as Earthtones: A Nevada Album. Her latest is a work of fiction, Friendly Fallout 1953. Since retiring, she’s been reading vociferously, so “Bookin’ With Sunny” is giving her a wonderful opportunity to share thoughts about her favorite new discoveries.
More from this reviewer
PrevParis Was Ours
This Fight is Our FightNext