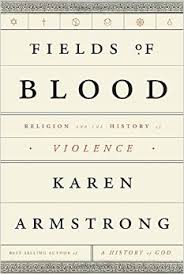 Fields of Blood: Religion and the History of Violence

Since reading and swooning over Karen Armstrong’s A History of God twenty years ago, I have eagerly devoured her subsequent books. I approached Fields of Blood, her newest work, with anticipation. Although not disappointed, I found myself arguing with her more frequently than in some of her past books. I am writing this review several days after the murders of more than a dozen people in Paris by Islamist terrorists. My disagreements with her are affected but not created by these events. These recent attacks underscore both the importance of Karen Armstrong’s tolerant and pluralistic perspectives and the difficulty of maintaining a nuanced view.

For those of you who may not be familiar with her writing, Armstrong is an ex-Roman Catholic nun whose historical works about the three monotheistic, Abrahamic religions (Judaism, Christianity, and Islam) have been lauded by thoughtful adherents from each of these traditions and non-adherents, too. In this ambitious book, she branches out to include nearly every written religious tradition beginning with Gilgamesh and his kingship in Uruk/Sumer (southern Iraq) around 2700 BCE. The Abrahamic traditions, however, remain central to her concerns throughout this book.

Fundamental to her world-view is her evidence-based assertion that the Golden Rule remains the essential ethical teaching in all world religions, even in these days of intense sectarian strife. If a common impulse in all religions is “Do unto others . . . .” then it follows that religions must have a tendency to promote peace. However, that is not what she sets out to demonstrate in Fields of Blood, a book that explores the relationship between religion and war. Oversimplifying, Armstrong’s Fields of Blood is one of the ways that she discusses war and peace. Another is found in her Charter for Compassion, readily available on line.

The 9/11 attacks and the events since have prompted Armstrong to write about the historical and present day connections between religion and violence/war. She argues that the monotheistic religions are not the universal causes of war and violence that Western observers often ascribe to them. She overtly rejects the idea that the monotheistic, Abrahamic religions are specifically the cause of either historical or present-day wars and violence. For her, Islamic terrorism is mostly about power and politics.

She argues that before 1700 there was no distinction between politics and religion as categories. They can’t be separated. The idea of the separation of church and state is relatively new and not at all universally accepted. I grant her conclusion, too, that the state (then as now) seeks to have a monopoly on violence in order to secure internal order and external protection or conquest. All too often, however, the leading Abrahamic religious leaders in the period before and after 1700 have provided ideological support for states’ leaders in their pursuit of wars and genocides. Such rationales in the name of God should not lead us to reject all monotheistic religions but neither do they allow us to ignore the questionable importance that the Golden Rule has had in religious history. I have no quibble with her view that it ought to play a larger role.

Her efforts to discourage oversimplifications about the role that religion plays in war are laudable. Particularly, she takes pains to explain why and how Islamic extremism shouldn’t be used to condemn all of Islam any more than fundamentalist Christians rejection of evolution should be used to characterize all of Christianity. Still the facts on the ground since 9/11 suggest that Islamic fundamentalism tends to be particularly violent. Her explanations as to why this is so suggest her espousal of the old French proverb: to understand all is to forgive all. This is beyond me.    – Neal Ferguson

Also available by Karen Armstrong: A History of God; The Case for God; Twelve Steps to a Compassionate Life; Muhammad: A Prophet for Our Time; The Battle for God; The Spiral Staircase; Muhammad, A Biography of the Prophet; The Great Transformation; Jerusalem, One City, Three Faiths; Through the Narrow Gate; Holy War, The Crusades and Their Impact on Today’s World; The Gospel According to Woman; In the Beginning, A New Interpretation of Genesis; Buddha; Islam, A Short History; A History of Jerusalem; Visions of God. 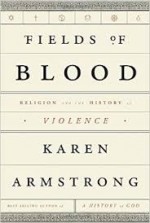 Neal Ferguson is a self described Anglo-phile. After studying for a PhD in British history and doing research for a year in various British archives, he came to the University of Nevada in 1970 to teach. Soon he found himself in administration where he remained until 2003. After returning to full-time teaching a decade ago, he decided to concentrate his teaching energies on Medieval British history and various global aspects of World War II. Dedicated to Ambrose Bierce’s proclamation that the purpose of war is to teach Americans geography, Neal insists that his students accompany him (in class) to sundry east European rivers and steppes, African deserts and jungles, south-east Asian mountain ranges and peninsulas, and small islands and coral reefs in the Pacific. Currently he is writing a book about the ups and downs of General Douglas MacArthur’s military reputation.
More from this reviewer
PrevTwo Civil War Novels
The Children’s CrusadeNext