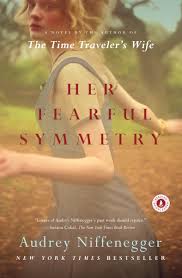 Audrey Niffenegger possesses an astonishing imagination. Often weird, often egocentric, often wildly fanciful, her mind pivots, swivels, dives, soars from one tangent to another. The Time Traveler’s Wife, her first novel, turned chronology inside out, juxtaposing a man who traversed from century to century against a beloved woman who lived normally. I liked The Time Traveler’s Wife, but didn’t review it for “Bookin’ with Sunny” because I couldn’t find the words to describe its unbelievable transitions. Her Fearful Symmetry tells a story equally on the edge between reality and the impossible. In a way, it reminds me of Henry James’s Turn of the Screw, whose ghosts I’ve always admired. So I’m going to write about Her Fearful Symmetry because many “Bookin” readers will enjoy it. Even though I personally had a hard time suspending my disbelief while I was reading its unbelievable narrative, I couldn’t put the book down. That’s always a good sign!

Her Fearful Symmetry, its title borrowed from William Blake’s well-known Tyger poem, centers of the symbiotic connections between twins. Julia and Valentina are inseparable mirror images of each other. Julia, whose organs are correctly ordered, is the leader; Valentina, whose heart is located on the right rather than the left, follows her sister’s directions. Valentina is obedient until Her Fearful Symmetry begins to reveal schisms in the twins’ carefully ordered lives. Their aunt, their mother’s twin, dies and leaves her flat in London to the nieces she never really knew. Indeed, the older set of twins has been estranged for years. Aunt Elspeth’s will includes two stipulations: Julia and Valentina must live in her flat for at least a year, and their mother must never enter her daughters’ new home. Otherwise, the inheritance will be null and void.

Robert complicates matters. Elspeth’s lover and now the executor of her estate, he lives in the flat below Elspeth’s (now the twins’) and he is obsessed by mortality. A guide in London’s Highgate Cemetery, which is conveniently located next door, he spends most of his waking hours thinking about the deceased. Martin, who lives in the flat on the top floor, provides another diversion. Suffice to say that Robert finds himself attracted to Valentina, while Julia befriends Martin. Before long, inseparable becomes insufferable. But there is yet a third complication: Elspeth’s ghost, who hovers over the scenery and tucks her amorphous form into the furniture when things get out of hand.

And things do get out of hand. Before long, Elspeth surfaces. First Valentina can see her, then others can as well. They figure out methods of communication, and then they figure out ways to revitalize their lives, all their lives. Revealing the denouement would ruin a reader’s enjoyment of the machinations that take place at the end of Her Fearful Symmetry. Suffice to say that Niffenegger’s imaginative flights of fancy take over the realities of everyone involved in this innovative novel. As I wrote at the outset, a willing suspension of disbelief is absolutely essential to enjoy the unbelievable story line. Given that stricture, a committed reader won’t be able to put the book down.   – Ann Ronald 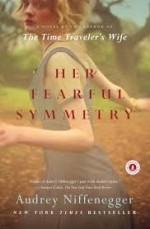 Ann Ronald is a retired English professor from the University of Nevada, Reno. Author of dozens of reviews, she’s also written a number of books about the American West. They include literary studies such as The New West of Edward Abby and Reader of the Purple Sage, cultural studies such as GhostWest and Oh, Give Me a Home, and nature writing such as Earthtones: A Nevada Album. Her latest is a work of fiction, Friendly Fallout 1953. Since retiring, she’s been reading vociferously, so “Bookin’ With Sunny” is giving her a wonderful opportunity to share thoughts about her favorite new discoveries.
More from this reviewer
PrevTommy
DroodNext