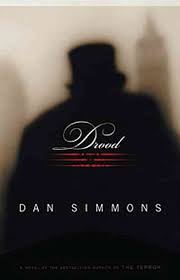 By 1865, Dickens’ best works were behind him, but he had plenty of income giving highly successful public readings of his works both in England and the United States. Collins, too, enjoyed success with his mystery novels The Woman in White and The Moonstone, both of which had appeared serially in Dickens’ magazine All the Year Round. Yet all was not right between these two literary figures. Being a rather unattractive man with little talent as a performer, Collins had little success with readings. A rivalry developed based on Collins’ envy of Dickens’ continued success and wealth. Collins was addicted to laudanum a drug which he abused and eventually his thoughts turned to murder.

This is the premise of Drood, a massive 800-page thriller mostly based on historical record. Simmons’ tale of bitter conflict between literary giants reminded me of the legendary rivalry between 18th century composers Salieri and Mozart.

That apocryphal tale was the basis of an 1897 opera by Rimsky-Korsakov. Of course we know the story from Peter Shaffer’s stage play Amadeus which became Milos Forman’s 1984 film Amadeus. The play and the film are quite different, but the rivalry they depict is much the same. In Amadeus and Drood, real events are mixed with fiction to produce two tall tales about great artists and their professional jealousies. In both stories, the lesser figure becomes so envious of the other’s success he actually plans murder. History does not record whether Antonio Salieri or Wilkie Collins ever plotted such a deed.

The title Drood comes from Dickens’ uncompleted final work,The Mystery of Edwin Drood, which was published despite its fragmentary state. More recent hands have tried to complete it with varying success. My favorite is still the 1935 movie starring Claude Rains.

Without giving too much away, in Simmons’ novel, Charles Dickens dies in 1870 before Collins is able to murder him. Indeed, Dickens has the last laugh. The character John Jasper, the drug-addicted churchman and murderer in The Mystery of Edwin Drood, can be seen as a cruel and ugly portrait of Wilkie Collins in Drood. In real life Collins outlived Dickens by almost two decades, but never came close to his rival’s literary reputation.

So what does Dan Simmons do with the 800 pages at his disposal? Is he trying to reproduce the language of an overstuffed Victorian mystery such as The Moonstone? Hardly, Simmons’ prose is written in modern American English. Drood consists of two major elements: the immense piling-on of meticulously researched historical detail and an outrageous supernatural story set in the vast underground beneath London and Rochester, the cathedral town called Cloisterham in The Mystery of Edwin Drood. Let the reader beware. Most of the horror elements spring from the drug-addled brain of Simmons’ fictional Wilkie Collins. Did they really happen or not?

Dan Simmons is the author of Darwin’s Blade, the Hyperion/Endymion series, Hard As Nails, Olympus, and the epic horror novel Carrion Comfort (1989). I enjoyed Carrion Comfort very much despite its 636 pages of tiny print. I also recommend Drood to readers prepared for a leisurely blend of literary history and supernatural thrills. 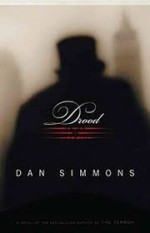 Dan Erwine holds a BS in Telecommunications, San Diego State University. Dan recently retired after four decades in radio broadcasting. His background San Diego stations KFSD and NPR's KPBS, and KUNR, Reno, NV. Over the years, Dan has produced and hosted a number of talk shows and interviewed over five thousand writers in almost every genre and career, from such notables as David Brin to Seamus Heaney, Allen Ginsberg, Judy Collins, Charlton Heston and Wally Schirra. Dan is a comic book aficionado and has a special interest in film, science fiction and mystery. He lives with his wife in Reno, NV.
More from this reviewer
PrevHer Fearful Symmetry
Traveling LightNext