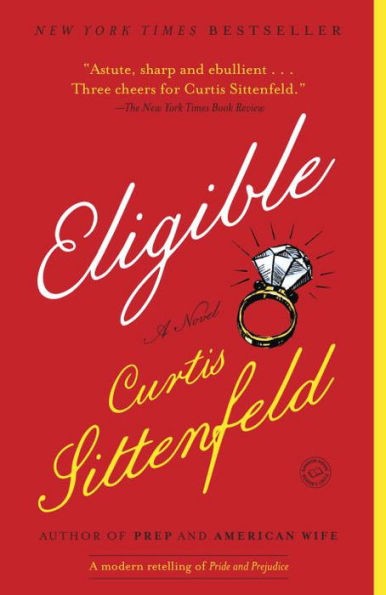 Quite simply, Curtis Sittenfeld’s novel, Eligible, is a hoot! I chuckled aloud as I read—each page, each character, each episode funnier than the one before. For fans of Jane Austen’s Pride and Prejudice, Eligible is an absolute delight, a take-off on Austen’s masterpiece that remakes her gentile, nineteenth-century characters into twenty-first century avatars who exemplify what is most idiosyncratic about current American behavior.

All of our favorites romp through Eligible’s scenes. Liz Bennet, of course, is the star, although her four sisters play prominent roles, too. Liz, a thirty-eight-year-old New York features writer for a women’s journal, Mascara, returns home to Cincinnati to help care for her father while he recuperates from a heart attack. Her elder sister, Jane, a New York City yoga instructor, joins Liz there. Together, they try to make sense of their family dynamics. Mary, the middle sister, takes online course after online course and mysteriously disappears one night each week. Kitty and Lydia, both unemployed and both committed vegans, work out incessantly at a nearby gym. They seem to contribute little to the family well-being. All three younger Bennets still live at home with their parents who are themselves stylized, modern-day versions of Jane Austen’s eccentric Mr. and Mrs. Bennet. His irreverent asides regularly punctuate her need to impress her country club confidantes. She is obsessed with her unmarried daughters, too, trying desperately to find them suitable (well-to-do) mates.

Early in the novel, Jane falls in love with Chip Bingley, a Cincinnati ER physician who once achieved fame as a contestant on “Eligible,” a television reality show rather like “The Bachelor.” Chip’s best friend? Fitzwilliam Darcy, an arrogant, aristocratic neurosurgeon whose testy personality immediately infuriates Jane’s sister, Liz. Lurking in the background, too, is Chip’s sister Caroline, who on sight despises Liz. The feeling is mutual. Add to the mix Charlotte Lucas and cousin Will Collins and Lydia’s enigmatic suitor. You can imagine how Sittenfeld stirs the proverbial pot.

But until you actually read Eligible, you can’t truly imagine how creatively the author has updated the old Pride and Prejudice storylines. Collins, for example, is a techie nerd who has made his fortune in Silicon Valley, not a rural clergyman, but he is as pompous and self-centered as his predecessor. Darcy is even more fun as a re-made modern man. He and Liz joust regularly about “provincial” Cincinnati, misunderstand each other when communicating via text messages, bond while jogging in humid Cincinnati heat. I won’t even try to describe his family estate in California, Pemberley, with its spacious grounds perfect for croquet and its magisterial decor.

Some of the best parts of Eligible, however, are the places where Sittenfeld deviates from Jane Austen’s plot. It’s as if she used the Pride and Prejudice skeleton to give birth to a whole new way of looking at the characters and their peculiarities. Sittenfeld’s men and women sleep together, drink too much, reveal way too much, even get pregnant. All the while, they communicate in the same satirical style that Austen perfected. It’s just tonally updated, in your face, like reality tv. I was thoroughly amused; any Liz and Darcy fan will be, too. – Ann Ronald

Also available by Curtis Sittenfeld: You Think It, I’ll Say It; Rodham; Sisterland; The Man of My Dreams; American Wife; Prep. 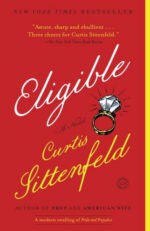 Ann Ronald is a retired English professor from the University of Nevada, Reno. Author of dozens of reviews, she’s also written a number of books about the American West. They include literary studies such as The New West of Edward Abby and Reader of the Purple Sage, cultural studies such as GhostWest and Oh, Give Me a Home, and nature writing such as Earthtones: A Nevada Album. Her latest is a work of fiction, Friendly Fallout 1953. Since retiring, she’s been reading vociferously, so “Bookin’ With Sunny” is giving her a wonderful opportunity to share thoughts about her favorite new discoveries.
More from this reviewer
PrevThe Last Days of Night
The Girl You Left BehindNext