Because I was born and raised in Seattle, I look for books by Pacific Northwest authors. Since reading Snow Falling on Cedars, one of my favorite Washingtonians has been David Guterson. In his latest novel, Ed King, he describes perfectly my childhood landscape. “December in Seattle is a dark proposition—by four, the light has disagreeably failed, and from there the descent into night is so rapid that by five one feels a sense of lockdown. The freeways, especially on a Friday after dark, are zones of blurred vision and unsociable fear, and of rainy pavements as translucent as oil slicks in the massed glow of headlights.” Besides his wonderful gift for visualization, I also appreciate the fact that each of Guterson’s novels differs so entirely from all the others. Tragedy, comedy, history, satire—from book to book, his angle and his tone change radically. Ed King is totally unlike its predecessors, and so far removed from Snow Falling on Cedars that it’s hard to imagine the same author writing both stories.

Where Snow Falling on Cedars is a sobering look at racial prejudice, with a poignant undercurrent of long-lost adolescent love and a heavy overdose of conscience, Ed King is a tongue-in-cheek romp through two generations of bedrooms. Rarely pausing for any introspection whatsoever, Ed King is also a contemporary take-off on the long-enduring Oedipus, Lauis, and Jocasta myth. With great energy and irony, Guterson borrows the story of a man who accidentally murders his father and sleeps with his mother, then turns it into a rollicking modern-day tale of a boy who grows up to be a wealthy mogul and who systematically makes the same unfortunate mistakes of Oedipus Rex.

The ostensible hero, Ed King, is a boy and then a man always in the limelight. Adored by his adoptive parents and beloved by men and women alike, he forges an internet empire and becomes, in effect, a king. “He was like a snowball rolling steeply downhill, always bigger, always gathering mass, to the point where a cascade, or even an avalanche, could be generated across a sector of the economy by virtue of his motion and growth.” At the same time, Ed is deeply and satirically flawed. In lock-step with Oedipus, his forefather, Ed knows neither his past nor his future. He assumes his parents are the couple who raised him, and he has no premonitions whatsoever about what will become his fate. Only years after he has mistakenly killed his father on a lonely road, and then foolishly married a women fifteen years his senior, does genetic coding begin to unravel his life.

Equally flawed are the Ed King supporting characters. Many of them come and go in rapid-fire, ribald, and picaresque fashion. The novel spans more than half a century, beginning with Ed’s conception and ending with his dark discovery about his origins. The one constant is Diane, Ed’s mother and later his wife, as her story occupies chapters interspersed with Ed’s own. Diane’s life is no less ribald and picaresque than Ed’s, equally shallow and rapid-fire, equally satiric and risqué. In truth, aside from the obvious plot correlations with Oedipus Rex, Ed King reads more like Gargantuan and Pantagruel or a made-for-the-internet Tom Jones, than a sober retelling of Greek mythology. It’s hell-bent for pleasure, as fast as the pages will turn. Not every reader will like Guterson’s latest, but many will find it an hysterically amusing, twenty-first century counterpart to a favorite old doleful story line.

Also available by David Guterson: Snow Falling on Cedars; The Other; East of the Mountains; Our Lady of the Forest; The Country Ahead of Us, The Country Behind; The Drowned Son; Family Matters, Why Home Schooling Makes Sense 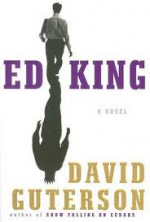 Ann Ronald is a retired English professor from the University of Nevada, Reno. Author of dozens of reviews, she’s also written a number of books about the American West. They include literary studies such as The New West of Edward Abby and Reader of the Purple Sage, cultural studies such as GhostWest and Oh, Give Me a Home, and nature writing such as Earthtones: A Nevada Album. Her latest is a work of fiction, Friendly Fallout 1953. Since retiring, she’s been reading vociferously, so “Bookin’ With Sunny” is giving her a wonderful opportunity to share thoughts about her favorite new discoveries.
More from this reviewer
PrevGood Prose
A Change of AltitudeNext