A Change of Altitude

Best-selling novelist Anita Shreve spent three years in Kenya in the late 1970s. While there, she worked as a journalist, and she even climbed Mount Kenya. Forty years later, Shreve wrote A Change in Altitude, set back in that time and place. The main character, Margaret, works as a journalist in Nairobi, although she is a photographer rather than a reporter, and the crux of the novel’s action takes place while climbing Mount Kenya. Shreve says, however, that “I can’t think of a single scene in the book that’s actually true.” In fact, she insists that a novelist’s creative responsibility is to use her imagination to the fullest and to go far beyond the boundaries of personal experience. So Margaret’s adventures and insights all come from her author’s fabrications and artistry.

The Reading Group Guide that accompanies A Change in Altitude also includes a statement about Shreve’s thematic intent. “I’m fascinated by the human heart,” she reports, “and how people react in extraordinary moments.” This thread runs through all her novels. Each one contains an instant in time that changes everything, either literally or figuratively or both. Often that moment causes a schism in a relationship, one that the characters either struggle to repair or to increasingly agonize over the irreparable harm the incident has caused.

In A Change in Altitude, the climactic occasion occurs during a climb of Mount Kenya. Margaret and her husband, along with two other couples, are making the trek in the company of a Kenyan guide, several bearers, and a cook. An accident, a death, and no one is ever quite the same again. The remainder of the novel follows Margaret and Patrick as their marriage struggles to recover from the trauma of the events on the mountain’s glacier. Meanwhile, the vicissitudes of their daily lives are becoming entwined with the Kenyan political situation in the 1970s. During the course of the novel, the reader learns a great deal about native circumstances in those years, too.

In fact, this is perhaps what I most appreciated about A Change in Altitude. Shreve is particularly adroit at depicting local color, not in a superficial way but in a knowledgeable and deeply sensitive way. Except when communicating with Patrick, and coping with her marital problems, Margaret interacts comfortably with others. Whether the situation is the rape of an innocent caregiver or the dire poverty of those she photographs or the political upheavals taking place just outside the newspaper office, Margaret responds intuitively. It’s curious, in fact, that she can be so in tune with her surroundings and so out of sync with Patrick. Even while her marriage is fraying, and even while she views her husband through a somewhat curious lens, Margaret’s eyes clearly see a very real Kenya, not the glamorous façade of so many white entrepreneurs living there.

A Change in Altitude is a thoughtful novel, provocative both in its portrayal of post-colonial Africa (I use that phrase advisedly) and in its interrogation of human responses to sudden tragedy. The title itself expresses the tension well, because a change in altitude might also be a change in attitude. That duality is pivotal. Events transform Margaret, because the ascension of Mount Kenya has altered her forever.                        – Ann Ronald

Also available by Anita Shreve: Rescue; Testimony; The Weight of Water; Strange Fits of Passion; Light on Snow; The Last Time They Met; Resistance; The Pilot’s Wife; Eden Close; Sea Glass; Body Surfing; Fortune’s Rocks; All He Ever Wanted; Where or When; A Wedding in December; Olympia; and coming in November 2013, Stella Bain. 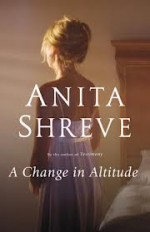 Ann Ronald is a retired English professor from the University of Nevada, Reno. Author of dozens of reviews, she’s also written a number of books about the American West. They include literary studies such as The New West of Edward Abby and Reader of the Purple Sage, cultural studies such as GhostWest and Oh, Give Me a Home, and nature writing such as Earthtones: A Nevada Album. Her latest is a work of fiction, Friendly Fallout 1953. Since retiring, she’s been reading vociferously, so “Bookin’ With Sunny” is giving her a wonderful opportunity to share thoughts about her favorite new discoveries.
More from this reviewer
PrevEd King
The Book of NonsenseNext