Home » This 'N That » Books are the Best Doors 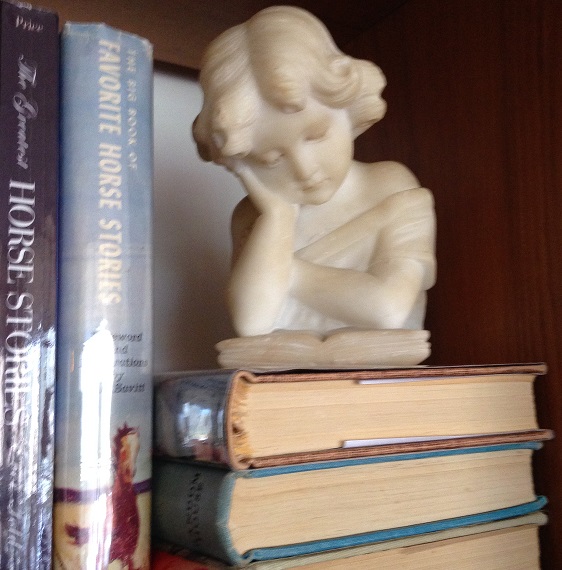 Books are the Best Doors

You’ve Got to be Carefully Taught

Several months ago I was reading a children’s book I bought a few years back. It’s a story written by one of my favorite childhood authors, one of her earliest horse books. I bought it for my collection, but when it arrived in the mail, I merely put it on the shelf along with her other horse stories intending to read it later. The book, written before publishers marketed kids’ books by category; today it would fall somewhere between a Picture Book and an Early Reader. The story is about sharing, how a colt called Chocolate, use to getting lots of attention as the darling of the breeding farm, must now share the limelight with a brand new colt.  I got it.

What I didn’t get was the racism contained in a book to be read to, and probably by, children. These would be kids in

the late 1940s and early 1950s. The story itself is not racist, but the stereotypical depiction of the African American groom is not only racist in its dialogue, but illustrations of the groom are also shocking. Grooms are an integral part of a successful breeding farm. This particular groom, however, was written with such disrespect and his caricaturist drawing is so over the top that I almost threw the book away.

But I didn’t. I thought about it and realized that this sort of racism must have been almost invisible to a reader in 1945. It’s just the way people of color were depicted, if depicted at all, in children’s books at that time. But I’m pretty sure that even without intent or malice, its racist impact would have been absorbed by the reader. I have since gone back to look through other children’s books to see what I could find. It’s there. And the farther back I went, the more prevalent it is.

Then I came across an updated version of the story published in 1989, by Weekly Reader, the inexpensive books

children could buy in schools. The illustrator is new, as is the groom who is now Irish American. And true to the subtlety of racism, my first reaction was, Great, they finally got it. It took several months for me to look at the updated version again to realize, No, they didn’t get it at all. Instead of giving “Whitey” (the groom’s name) the respect owed a groom of budding race horses, the author/publisher simply wrote him out.

So, if white children have been reading this passive yet embedded disrespect for story characters of color for years on end, how are they supposed to think any differently as they grow up? Or, are we still deep into Rogers and Hammerstein’s You’ve Got to be Carefully Taught. I can already hear people saying, “No, it’s changed. There are lots of children’s picture books with characters of diversity.” That may be true, but the percentage remains incredibly small.

Today, through broadcast and social media, it is more and more apparent that racism in the United States did not end with the Proclamation of Emancipation, the end of Jim Crow laws, or the Civil Rights legislation of the 1960s. What? Is it in our DNA? I think it is, sort of. Generation after generation of Caucasian children in the United States grow up understanding that it is okay to see people with a skin color darker than their own as “others,” people who are different, less respected, less important than they are. And why wouldn’t they? What would happen if generation after generation of Caucasian American children began their first book experience with picture book characters of color? Picture books dealing with childhood experiences not dependent on skin color?

No doubt the increased publication of picture books written and illustrated by people of color and others is happy news to ethnic American families. Such is the goal of numerous organizations working toward that increase publication number. My question is this: how will the child of color’s reading of such picture books influence Caucasian children unless they, too, are reading the same books? It’s high time for white children to have picture books in which the skin color of the children in the stories is not the same as their own.

Reading While White is a national organization of librarians whose goal is to make public library collections more reflective of the communities in which they are located. I’d go a step further. I would say it is equally important for libraries in predominately Caucasian communities to stock their shelves with these same books.

Now the soapbox: Caucasian parents, grandparents, aunts, uncles, friends and neighbors, the next time you buy a book for a child, ask your bookseller (including online) for a book containing a main character of color. I’m not talking about books that describe different cultures or attempt to explain diversity. I am talking about books with stories about shared childhood experiences, no matter what color the child’s skin is.

It’s a two-for-one bargain: you introduce a child to the wonderful world of books; and at the same time, you introduce a child, without prejudice, to the Technicolor world in which they live. Who Knows? Maybe generation after generation of Caucasian children who grow up reading such books can make a difference. Books can be doors. Let’s open those doors to a better future. – Sunny Solomon