An Arsonist’s Guide to Writers’ Homes in New England 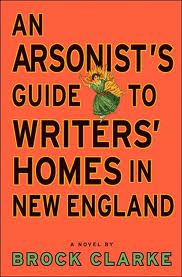 An Arsonist’s Guide to Writers’ Homes is a most singular novel and one that will stick with the reader for a long time after the last page. It’s appeal is a conundrum, a puzzlement that is best left alone. But it is a testament to Clarke’s prowess as a storyteller that we care deeply for his mousey, hapless protagonist, Sam Pulsifer, sent to prison as a teenager for not only accidentally burning down Emily Dickinson’s home, but incinerating the home’s docent and her husband, whose charred remains are found in the ruins of Emily’s bed.

The burning of Ms. Dickinson’s home was accidental and the death of the docent and her husband, who ought not to have been in Emily’s bed, can only be chalked up to bad timing. Because of his age, Sam spends ten years in a minimum security prison (a merciful judge) and comes out with a high school diploma and a desire to put it all behind him. In a way, he does. He returns home to Amherst, but finding he is no longer welcome at home or in the community, he leaves for college. Sam graduates and goes to work for a company designing container products like storage bags. He marries, has children, and moves to a bedroom community not far from where he grew up. Sam’s wife and children know nothing of his arsonist past and believe he is the orphaned son of parents who tragically died in a fire.

This is Sam’s story. It is his memoir, with all the pitfalls of a memoir. What is true, what really happened, what is remembered……we all know how tricky memoirs can be. He is also telling us about a book he will write, an arsonist’s guide for potential torchers with literary hit lists. Literary hit lists? Author Brock Clarke takes the reader into some wonderfully dark, satirical territory.

When confronted by the angry, revenge-seeking adult son of the couple who died in the fire, everything Sam had put behind him moves front and center. His life begins to unravel. His wife locks him out of their home. The reader knew all along that it couldn’t last. Things only get worse. There are more fires. The homes of Mark Twain and Robert Frost–up in flames. Sam claims he had nothing to do with these fires. But if he didn’t do it, who did?

While he was in prison, Sam’s parents received mail from strangers outraged at the loss of Emily’s home; they also received letters from folks inquiring as to whether or not Sam might be interested in setting fire to a few other literary homes (after serving his time, of course). Now we have a mystery. Why would people feel so strongly about authors, their books and their homes? How does anyone come to hate the stories they read? And why do we read them, anyway? Sometimes they are read to us as children and others become the dreaded “must reads” of school. Sam’s mother was a high school English teacher who read to Sam for years. She is one key to the mystery. Sam’s father is a mystery all on his own (he never had much use for reading). And then there is Sam. Is he really so innocent?

Before the last fire is set, Sam, who fancies himself a novice detective, meets some of the people who wrote to his parents requesting their son’s services. There’s hardly a character in Brock Clarke’s novel who is not above suspicion. What Sam learns about these people, about himself (and a very complex relationship with both his mother and his father), and about writing and those that write, lays the groundwork to solving the mystery.

Sam is looking for more than an arsonist. When speaking about the importance of love, he observes, “For those of us who’ve lost it, love is also the thing that makes us speak in aphorisms about love, which is why we try to get love back, so we can stop speaking that way. Aphoristically, that is.” This is funny, pithy stuff. Is Sam learning anything? With a deft touch, Clarke describes Sam’s first realistic look at his father, “Because we all know that to be a son is to lie to yourself about your father. But once you start telling yourself the truth, does that mean you are no longer a son, and he is no longer your father?”

The novel’s end is not entirely unexpected, yet it’s impact is heart-stopping. An Arsonist’s Guide to Writers’ Homes in New England, is a satisfying read and for all its dark humor, satirical literary slant, and its cast of totally original characters, it’s not only entertaining, it is surprisingly rewarding

Sunny Solomon holds an MA in English/Creative Writing, San Francisco State University. She is a book reviewer for “The Clayton Pioneer” and her poetry and other writing has been published in literary journals, one chapbook, In the Company of Hope and the collection, Six Poets Sixty-six Poems. She was the happy manager of Bonanza Books, Clayton, CA and Clayton Books, Clayton, CA. She continues to moderate a thriving book club that survived the closure of the store from which it began. Sunny currently lives next to the Truckee in Reno, NV.
More from this reviewer
PrevThe Short Fall From Grace
Falling ManNext