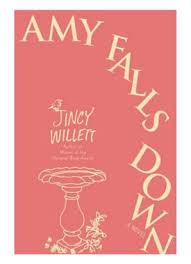 Jincy Willet is a very funny lady. That may be presumptuous, but after reading Amy Falls Down, I don’t think I’m far off the mark. Amy is a sequel to The Writing Class, but I recommend ignoring the whole business of “don’t read the second until you’ve read the first.” I don’t mind going backward, so The Writing Class is now on my “to read” list.

The character Amy is a woman somewhere in her fifties, a widow for many years, and a writer of  note when she was first published. Now, twenty years later, she freelances, makes a little more money as an online editor for aspiring writers and teaches creative writing. She has lived alone since the death of her husband Max, has found a pragmatic contentment in the companionship of her basset hound Alphonse, is proud to know more about computers than most women her age, and happy to maintain a life of marginal sociability. We can assume that the author has, in her character Amy, sown the seeds of self-mockery with great satirical flair. On her own website, Willett describes herself as: “An aging, bitter, unpleasant woman living in Escondido, California, who spends her days parsing the sentences of total strangers and her nights teaching and writing. Sometimes, late at night, in the dark, she laughs inappropriately.”

Amy trips and falls while carrying a Norfolk pine (a gift from a grateful student) to a spot in her garden. Alphonse is underfoot, she, herself, is still in her floppy slippers and the fall is inevitable, resulting in a concussion from knocking herself out after striking her head on a birdbath. Hours later she manages to get back into her house, but has forgotten that she is to be interviewed later that day by a young journalist publishing pieces on local authors for the “San Diego Union-Tribune.” The published newspaper piece describing Amy and her somewhat strange behavior during the interview (the concussion is still undiagnosed) skyrockets her every word to a readership eager for such literary tidbits.

In no time at all Amy becomes the star of the local NPR, and from there, a media frenzy is established. Her books are back in print, her ailing agent re-emerges, micro-managing her new-found fame. Her wisecracking remarks about writers makes her the darling of the literary circuit. The novel takes the reader back to Amy’s personal and literary past with some pithy remarks about the personal and literary lives of authors today. In a world of mass publication, she worries about the ratio of readers to writers, “….surely we’re approaching some kind of catastrophic tipping point.” Another interview offers more insights about writers: “They spend their time writing, which is not a spectator sport. We don’t save lives. We don’t tap dance.”

What Amy needs to learn/must learn about herself, her husband’s death, her need for privacy, her need for connectivity and the risks she is willing to take: all are brought forth on a disastrous train trip back to the west coast from a cross-country speaking tour. Amy Falls Down may be short on plot, but not on wisdom. Willett’s book is as funny as it is wise.      – Sunny Solomon

Also available by Willett: The Writing Class; Winner of the National Book Award, a Novel of Fame, Honor, and Really Bad Weather; Jenny and The Jaws of Life.

Sunny Solomon holds an MA in English/Creative Writing, San Francisco State University. She is a book reviewer for “The Clayton Pioneer” and her poetry and other writing has been published in literary journals, one chapbook, In the Company of Hope and the collection, Six Poets Sixty-six Poems. She was the happy manager of Bonanza Books, Clayton, CA and Clayton Books, Clayton, CA. She continues to moderate a thriving book club that survived the closure of the store from which it began. Sunny currently lives next to the Truckee in Reno, NV.
More from this reviewer
PrevThe Sleepwalkers
The Weather and Our TempersNext