Home » Reviews » All the Light We Cannot See

All the Light We Cannot See 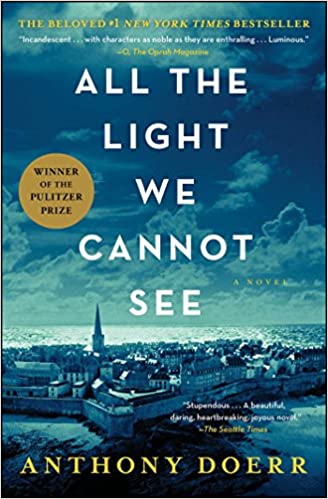 All the Light We Cannot See, the 2015 Pulitzer Prize Winner

Four years ago I reviewed Anthony Doerr’s Four Seasons in Rome for “Bookin’ with Sunny.” That memoir describes a year Doerr and his wife spent in Rome, raising twin babies while he was trying to work on a novel that would take him a full ten years to write. At the time, I made a mental note to read Doerr’s novel, All The Light We Cannot See, which won a 2015 Pulitzer Prize. I even bought a copy, which languished on a shelf until now, when a good long novel is a fine antidote to covid-19 social isolation.

Happily, I ensconced myself in the worlds of Marie-Laure LeBlanc and Werner Pfennig, reading eagerly to discover how their two milieus would coalesce. All The Light We Cannot See opens on August 7, 1944, when Allied Forces began bombing German-occupied Saint-Malo into submission. The French teenager Marie-Laure is home alone, cowering as explosions rock her surroundings. At the same time, young Werner and two fellow German soldiers are caught in the basement of the ancient Hotel of Bees, attempting to track French and American radio signals in the night.

Almost immediately, in the midst of that horrific barrage, Doerr’s novel slips into the past, to 1934, when Marie-Laure was six and diagnosed with permanent blindness, and Werner was seven and soon to be sent away to school. For the rest of the book, their stories move between present and past. Quite different stories they are, too. Marie-Laure’s world is one of brightness in the dark, intellectually stimulating, with loving surroundings. She and her father flee Paris when the Occupation begins, taking shelter in the Saint-Malo house that belonged to her grandfather and where her uncle still resides.

In contrast, Werner is quickly marked for his excellence in science and problem-solving and especially for his lightning-fast mathematical calculations. He is sent first to the National Political Institutes of Education, which stretches his mental acuity even as the youthful Nazi indoctrination torments him. Then Werner goes to war, where his electronic talents are sorely needed, but where he increasingly questions what he is being asked to do.

Back and forth, Marie-Laure isolated in her familial home, Warner trapped without egress in a hotel basement nearby. Then, Marie-Laure learning to navigate her increasingly narrow world, Werner ensnared in his own kind of darkness, a Nazi enforcement that his heart cannot abide. As I read All The Light We Cannot See, I imagined many different ways Doerr might cause these two young lives to intersect, but I never guessed the route he eventually chose. The novel’s final scenes, both in Saint-Malo when the bombing finally ceases, and then afterward, in post-War Germany and France, light up the dark, as it were. I finished All The Light We Cannot See with a satisfying –though unexpected—enlightenment about what it must have been like to survive the horrors of World War II.  For me, Doerr’s novel put our covid-19 horrors in perspective, too. It brought a bit of sunlight to today, as well as yesterday. His riff on shining light into the dark is well worth considering. Marie-Laure, physically blind but metaphorically moving in a halo of brightness; Werner, able to see all too well the darkness of Nazism and the havoc it wrought. And what of the afterlight, shining beyond the darkened years of war?  – Ann Ronald 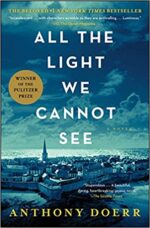 Ann Ronald is a retired English professor from the University of Nevada, Reno. Author of dozens of reviews, she’s also written a number of books about the American West. They include literary studies such as The New West of Edward Abby and Reader of the Purple Sage, cultural studies such as GhostWest and Oh, Give Me a Home, and nature writing such as Earthtones: A Nevada Album. Her latest is a work of fiction, Friendly Fallout 1953. Since retiring, she’s been reading vociferously, so “Bookin’ With Sunny” is giving her a wonderful opportunity to share thoughts about her favorite new discoveries.
More from this reviewer
PrevA Perfect Explanation
PelosiNext