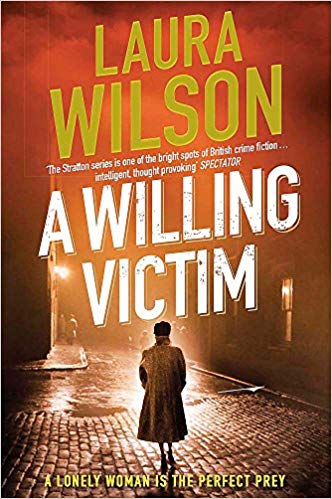 This time Sunny handed me the fourth book in a detective series, so I felt like I was starting in the middle. That turned out not to be a problem as A Willing Victim reads quite like a stand-alone novel. Only occasionally does the author, Laura Wilson, refer to a previous encounter or foreshadow future events. Her inspector is Ted Stratton, a widowed policeman whose investigation of a London murder takes him to a Suffolk setting and a series of encounters with aficionados of the Foundation for Spiritual Understanding.

The victim, in this case, is a young recluse whose bookshelves hold tomes on religious retreats, spirituality, and abstract philosophies. A difficult man, this loner had few friends and apparently had cut all his family ties. Retracing the victim’s past, Inspector Stratton learns that young Jeremy Lloyd had spent some time in residence at the Suffolk Foundation until the director forced the acolyte to leave. What exactly happened there at the Foundation, and why, become the focus of Stratton’s inquiries, for he correctly intuits that the solution to his London case stems from interactions in Suffolk.

Stratton’s pursuit of the victim’s past follows the logical lines of any British police procedural. The requisite egocentric men and malicious women populate the pages of A Willing Victim, while the countryside provides an appropriately atmospheric setting. There are the internal professional tensions, too, as Stratton often tactically disagrees with his superior and now must work alongside a former London colleague permanently relegated to Suffolk. One real strength of A Willing Victim is Wilson’s adroit handling of dialogue. Most of the action develops through conversations, and their voices individualize the characters. Where Stratton is a relatively straightforward man, his interviewees and his colleagues dissemble and evade.

But Stratton has his secrets, too, notably a lover he hides from his adult children who in turn conceal the details of their lives from their taciturn father. I wish I knew more about the lover, a glamorous socialite who differs from Stratton in almost every respect. He met her in a previous novel, The Innocent Spy. So even though Stratton’s personal history has no bearing on A Willing Victim’s plot, its undercurrents do make the reader curious.  England’s national history has played a role in Stratton’s prior experiences and in the development of his personality.

A Willing Victim is a historical novel as well as a detective story. Set in 1956, the plot reflects the tenor of the times. Atomic bombs and increasing tension with the Soviet Union trouble Stratton. Even the faith-based retreat characterizes a British citizenry unsettled by the war and uneasy about the future. I didn’t find the milieu as provocative as the ones created by Jacqueline Winspear or Susan Hill, two similar detective novelists whose historical outlooks I recently reviewed in “Bookin’ with Sunny,” but I did enjoy reading A Willing Victim. The sharp dialogue, the oh-so-English characters, and their unforeseen misdeeds provide a wonderful heinous escape. – Ann Ronald

Also available by Laura Wilson: Stratton’s War; A Little Death; An Empty Death; A Capital Crime; The Lover; Dying Voices; A Thousand Lies; The Wrong Girl; The Riot; Telling Lies to Alice; My Best Friend; The Other Woman; Daily Life in a Tudor House; How I Survived the Oregon Trail, The Journal of Jesse Adams; Daily Life in a Wartime House; How I Survived the Irish Famine; Grit and Glory, Six-man Football; Investigating Childhood in Tudor and Victorian Times; That Day, Pictures in the American West; Daily Life in Victorian England 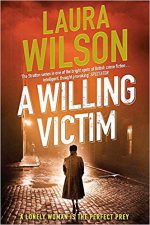 Ann Ronald is a retired English professor from the University of Nevada, Reno. Author of dozens of reviews, she’s also written a number of books about the American West. They include literary studies such as The New West of Edward Abby and Reader of the Purple Sage, cultural studies such as GhostWest and Oh, Give Me a Home, and nature writing such as Earthtones: A Nevada Album. Her latest is a work of fiction, Friendly Fallout 1953. Since retiring, she’s been reading vociferously, so “Bookin’ With Sunny” is giving her a wonderful opportunity to share thoughts about her favorite new discoveries.
More from this reviewer
PrevDeep Creek
Ada Byron Lovelace and the Thinking MachineNext