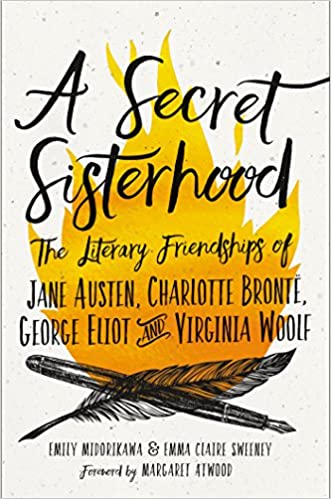 Almost every page of Emily Midorikawa and Emma Claire Sweeney’s book, A Secret Sisterhood, inversely took me back to my college studies. As a result, I find myself wanting to write a reminiscence rather than a review, a celebration of how very far literary studies have come in the last fifty years. A Secret Sisterhood could not have been written a half-century ago. Not only were certain archival materials and digital retrievals unavailable, but, more significantly, my generation’s literary scholarship was still a gendered endeavor.

As its subtitle explains, Midorikawa and Sweeney’s study examines “The Literary Friendships of Jane Austen, Charlotte Bronte, George Eliot, and Virginia Woolf.” Using contemporary correspondence and the recollections of other writers of their times, Midorikawa and Sweeney piece together inspirational friendships (and sometimes professional jealousies) between these four significant female authors and four of their friends. A Secret Sisterhood is a spritely piece of literary extrapolation that would never have occurred to anyone to write a generation ago.

In 1970 I finished a Ph.D. in Victorian literature at a highly-regarded private university. Throughout my undergraduate and graduate studies, I never took a single literature course taught by a woman professor. Looking back, I can only recall one female professorial face, a medievalist, so our paths never crossed. Most of my coursework centered on male writers, too, although the four sisters of A Secret Sisterhood were clearly in the canon of the greats. Back in those days, though, we studied them through gendered eyes.

I remember taking a seminar devoted entirely to Jane Austen’s novels, taught by a man regarded by students as the most sexist professor in the department. I remember getting a paperback with words capitalized and underscored on the page: “Miss Austen would not think this way!”  I remember thinking to myself, “Well, of course, she would. It’s middle-aged, misogynistic men who don’t comprehend how Jane thinks.” That’s the way critics studied women writers in those days, through a myopic lens that never quite illuminated what Jane or Charlotte or Marian or Virginia intended. What’s worse, because we students had never been exposed to any other course of study, we never realized the narrowness of our education, its gendered indoctrination.

Then the 1970s exploded with insightful feminist studies, and campuses slowly began adding women to their faculties. For the past fifty years, a sea change has occurred in the ways we view women writers, the ways we study the topics they choose, the ways we analyze the power of their words, even the ways we assess their inspirations. Scholars of yore, for example, generally focused on Jane Austen’s and Charlotte Bronte’s families as motivating factors, on George Lewes in George Eliot’s life, on Bloomsbury as Virginia Woolf’s muse.  Midorikawa and Sweeney dig deeply for something more, and in so doing, they add a dimension to literary studies sorely lacking in generations past. Rightly so, the final paragraph of A Secret Sisterhood articulates:

“ . . . misleading myths of isolation have long attached themselves to women who write: a cottage-dwelling spinster; an impassioned roamer of the moors; a fallen woman, shunned; a melancholic genius. Over the years, a conspiracy of silence has obscured the friendships of female authors, past and present. But now it is time to break the silence and celebrate their literary sisterhood—a glimmering web of interwoven threads that still has the power to unsettle, to challenge, to inspire.”

Midorikawa and Sweeney break that silence and celebrate in ways I could only imagine when I was in school. They write more intimately about their subjects. They set domestic anecdotes alongside forceful intellectual debates, a balancing act that would have sounded amiss in bygone years. They acknowledge their own literary friendship, too, and what that has added both personally and intellectually to their scholarship, to their creativity, and to their lives. Finally, Midorikawa and Sweeney look into the future, foreseeing on the horizon the existence of other secret sisterhoods as literary and cultural studies stretch their wings even more.   —  Ann Ronald 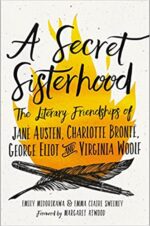 Ann Ronald is a retired English professor from the University of Nevada, Reno. Author of dozens of reviews, she’s also written a number of books about the American West. They include literary studies such as The New West of Edward Abby and Reader of the Purple Sage, cultural studies such as GhostWest and Oh, Give Me a Home, and nature writing such as Earthtones: A Nevada Album. Her latest is a work of fiction, Friendly Fallout 1953. Since retiring, she’s been reading vociferously, so “Bookin’ With Sunny” is giving her a wonderful opportunity to share thoughts about her favorite new discoveries.
More from this reviewer
PrevThe Housekeeper and the Professor
A Banquet for Hungry Ghosts – RevisitedNext