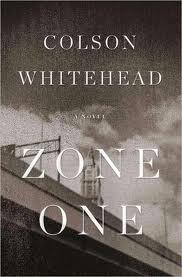 Colson Whitehead, winner of a MacArthur Fellowship, the Whiting Writers’ Award, and a keen observer of the American way of life, has written a story widely identified as a zombie novel. This reader isn’t so sure, even though the undead, with their distasteful choice of food and their unpleasant appearance and odor, are part and parcel of this narrative.

A world-wide plague, an event both cataclysmic and apocalyptic, has occurred and Zone One describes a small area of Manhattan, walled off and targeted for rebirth. Far upstate, a military and political cadre has bivouacked in Buffalo. From there, the U.S. Marines have been detached to Zone One with orders to seek out and eliminate the infected, who, although killed by the plague, return in an altered state better known as zombies, or the undead. But stragglers, a sort of subspecies of the infected, persist and once the Marines have moved out, trained civilian teams are sent in, a macabre mop-up crew moving through Zone One, building by supposedly empty building.

The novel takes place over a three day period in the company of a member of one of the civilian teams, ironically nicknamed Mark Spitz by his comrades. Spitz is the ideal survivor as “His aptitude lay in the well-executed muddle, never shining, never flunking, but gathering himself for what it took to progress past life’s next random obstacle.” He, like every other uninfected, has his Last Night story; the retelling of what it was like for him when the plague hit, his loss of family, and his terrifying escape. Last Night flashbacks move the narrative both in time and emotion. Last Nights are something all survivors have in common.

Zone One is a novel of loss and hope, but mostly loss. Spitz displays a youthful and unassuming courage. His parents  were “holdouts in an age of digital multiplicity, raking the soil in lonesome areas of resistance: a coffee machine that didn’t tell time, dictionaries made out of paper, a camera that only took pictures.” He is Whitehead’s everyman, trying to figure out what has happened and not at all sure he will survive.

By the time the wall begins to crumble as hordes of the undead continue to seemingly pour into Manhattan in spite of redeployed Marines, the reader may begin to think of the Zone One as something more than zombie pulp fiction. Whitehead has created a world both frightening and hauntingly familiar. The undead are gathering not only in Manhattan, but in cities across America. Spitz wonders “If the beings they destroyed were their own creations…” And “whatever the next thing was, it would not look like what came before.” Could this post-apocalyptic world be the present? Perhaps the undead are already here.

“In the stream of the street the dead bobbed in their invisible current. These were the angry dead, the ruthless chaos of existence made flesh.” Spitz must keep moving to survive. It is time to sink or swim. And that’s apt advice for anyone looking for a deeply entertaining read.   – Sunny Solomon

Sunny Solomon holds an MA in English/Creative Writing, San Francisco State University. She is a book reviewer for “The Clayton Pioneer” and her poetry and other writing has been published in literary journals, one chapbook, In the Company of Hope and the collection, Six Poets Sixty-six Poems. She was the happy manager of Bonanza Books, Clayton, CA and Clayton Books, Clayton, CA. She continues to moderate a thriving book club that survived the closure of the store from which it began. Sunny currently lives next to the Truckee in Reno, NV.
More from this reviewer
PrevThe Paper Bag Princess
Great JoyNext