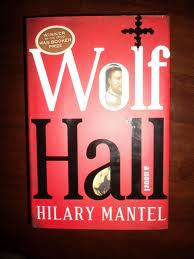 If you love history and if you relish smart historical novels, Hilary Mantel’s Wolf Hall is a book you do not want to miss. Mantel retells the familiar saga of King Henry VIII’s desire to father a son and his subsequent struggles to break England away from Catholicism and Rome, but she does so from a new perspective. Her narrative watches the historic events through the eyes of Thomas Cromwell, a man who always seems to be in the right place at the right time. Cromwell is shrewd, incisive, almost Machiavellian. Watching him manipulate people, orchestrate events, and position himself for success is genuinely fascinating.

Wolf Hall is the first of a trilogy that Mantel is writing about Thomas Cromwell. This novel traces the downfall of Cardinal Thomas Wolsey, the ascension and subsequent fall of Thomas More, and the growing influence of Anne Boleyn and her relatives on the King of England. Wolf Hall won both the Man Booker Prize and the National Book Critics Circle Award in 2009. It ends with Anne Boleyn on the throne, Katherine of Aragon banished to the countryside, and an innocent young Jane Seymour waiting in the wings. Wolf Hall’s sequel, Bringing Up the Bodies, which I have not yet read, apparently follows the course of Anne Boleyn’s short reign. The final segment of the trilogy, The Mirror and the Light, will track the last four years of Thomas Cromwell’s life. Mantel hasn’t written it yet, but she promises to “bring it home in style.” In fact, she predicts the finale will resemble Wolf Hall more than Bringing Up the Bodies because the Anne Boleyn book only covers a few months, whereas the other two span several years.

A longer time span allows Mantel to do what she does best—get inside the daily conversations, dance around the innuendos, and provide the intellectual and psychological intimacy that blockbuster historical novels often lack. Her world is not a panoply of dates and battles. Rather, it is a circumscribed milieu of courtly intrigue, gossip, and social positioning. On every page, Cromwell accumulates more of the influence he craves. He muses that “there’s a feeling of more and more power in reserve, a power that drives right through the bone, like the shiver you sense in the shaft of an ax when you take it into your hand. You can strike, or you can not strike, and if you choose to hold back the blow, you can still feel inside you the resonance of the omitted thing.” Cromwell loves the machinations.

At the same time, he and the other characters are pondering weighty matters concerning the future of their country. “It is time to say what England is, her scope and boundaries: not to count and measure her harbor defenses and border walls, but to estimate her capacity for self-rule. It is time to say what a king is, and what trust and guardianship he owes his people: what protection from foreign incursions moral and physical, what freedom from the pretensions of those who would like to tell an Englishman how to speak to his God.” Two national crises—the passion King Henry VIII has for Anne Boleyn and for a male heir, and the potential dismissal of British Catholicism—intertwine. In Wolf Hall, Mantel brilliantly braids both strains together, twisting words and deeds, plaiting metaphor and manners. We all know how the story will end, but getting there is what is so special about Mantel’s imagination, her point of view, and her prose.                             – Ann Ronald

Also available by Hilary Mantel: Bringing Up the Bodies; A Change of Climate; A Place of Greater Safety; Fludd; Giving Up the Ghost; Beyond Black; An Experiment in Love; Eight Months on Ghazzah Street; Every Day is Mother’s Day; The Giant, O’Brien; Vacant Possession; Learning to Talk.

Ann Ronald is a retired English professor from the University of Nevada, Reno. Author of dozens of reviews, she’s also written a number of books about the American West. They include literary studies such as The New West of Edward Abby and Reader of the Purple Sage, cultural studies such as GhostWest and Oh, Give Me a Home, and nature writing such as Earthtones: A Nevada Album. Her latest is a work of fiction, Friendly Fallout 1953. Since retiring, she’s been reading vociferously, so “Bookin’ With Sunny” is giving her a wonderful opportunity to share thoughts about her favorite new discoveries.
More from this reviewer
PrevA Beautiful Place to Die
Belshazzar’s DaughterNext