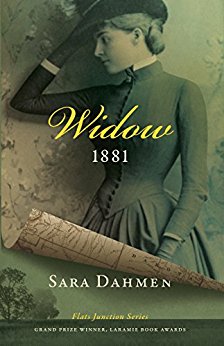 A classic cast of characters populates Sara Dahmen’s novel, Widow. The naïve easterner, a winsome heroine headed West for reasons revealed only piecemeal as the novel progresses. The Sihasapa native caught between two cultures and the onslaught of history. The Irish doctor, responsible for the animal as well as the human inhabitants of burgeoning Flats Junction. The strong, silent, cowboy suitor, taciturn and reserved. Others come and go onstage—the embittered shopkeeper, the aloof blacksmith, the soiled doves, the sassy loiterers, the tittering gossips, the broods of high-spirited children. Sound familiar? But rather than employing triteness to tell her story, Dahmen meticulously makes each person exceptional.

Over the years, I’ve studied a lot of westerns. While reading Widow, I never once thought of its characters as stereotypes. Only in retrospect, drafting this review, did I recognize the brilliance of Dahmen’s achievement. She has turned a formulaic population into unique individuals who alternately charm and infuriate, delight and frustrate, please and annoy, who keep an otherwise rather conventional novel of western settlement from becoming too prescribed.

Widow takes place in 1881, in South Dakota Territory just five years after Custer’s debacle at the Little Big Horn. Settlers rapidly are establishing communities like the fictional Flats Junction, where the new railroad promises ready access for travelers and homesteaders alike. Jane Weber chooses Flats Junction by happenstance, replying to a vague advertisement in the Boston Traveler. Someone in the western territories needs a housekeeper; she is seeking a job somewhere far from her eastern seaboard family and friends.

Her arrival in Flats Junction pitch-perfectly describes an embryonic western town toward the end of the nineteenth century. “The earth is both dark and brown as well as soft where the snow is gone or scraped by the wind,” Jane observes. “I find it easiest to keep my mind on my feet as I pick my way around the wagon ruts and horse prints and dung. I try not to think of the cobbled streets I left, and the swept front porches and painted wood of the homes. Here everything is grey and grown and dun and not a bit of green or color to be seen. And oh heavens! It’s so very very cold!” This brief quotation reveals Jane’s personality, too. Simultaneously adventuresome and reticent, decisive and uncertain, competent and insecure, she will tiptoe in and out of one situation and then race pell-mell on to another adventure. Her mercurial traits make her a fetching protagonist indeed.

Just as Widow characters like Jane continually surprised me, so did the plotting twists and turns. Some facets of the novel were to be expected. After all, it’s a western. But then Dahmen introduces historic complexities that force a reader to think outside expected parameters. For example, Dahmen’s treatment of the Sihasapa tribe not only involves Indian warfare and cultural resettlement to reservations, but also confronts assimilation and prejudice and ethnicity head on. Jane has an open mind, whereas some of the other Widow characters hold narrow imperialistic views. The interplay between Jane’s increasing magnanimity and the sterile colonialism of others adds genuine depth to a story that otherwise romances the reader along.

Overall, Widow will please a wide audience. Western fans will thoroughly enjoy the local color; romance aficionados will love multiple possibilities for happily-ever-after. Most of all, those who like some meat on their formulaic skeletons will relish Dahmen’s innovations. The characters, the plot, even the settings, are delivered freshly, with an eye for creative detail, an imaginative flair, and a skillful presentation.  – Ann Ronald 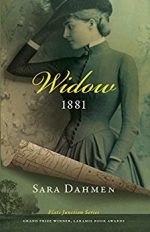 Ann Ronald is a retired English professor from the University of Nevada, Reno. Author of dozens of reviews, she’s also written a number of books about the American West. They include literary studies such as The New West of Edward Abby and Reader of the Purple Sage, cultural studies such as GhostWest and Oh, Give Me a Home, and nature writing such as Earthtones: A Nevada Album. Her latest is a work of fiction, Friendly Fallout 1953. Since retiring, she’s been reading vociferously, so “Bookin’ With Sunny” is giving her a wonderful opportunity to share thoughts about her favorite new discoveries.
More from this reviewer
PrevAfter the Shot Drops
A Gentleman in MoscowNext