Home » This 'N That » What’s Not to Love About Collecting and Reading Books? 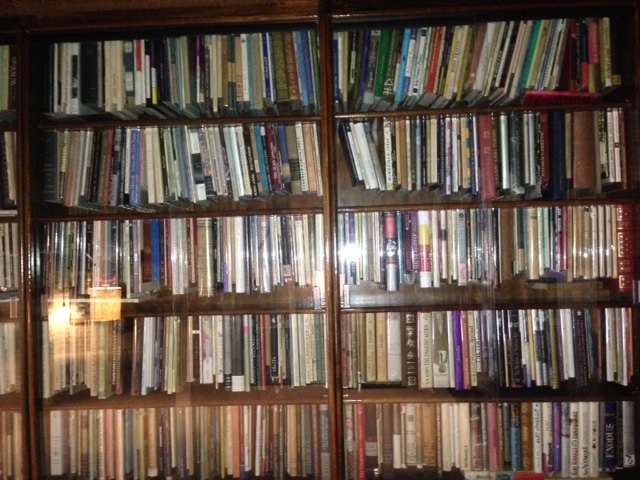 What’s Not to Love About Collecting and Reading Books?

What’s Not to Love About Collecting and Reading Books?

At seventy-six, my habit of collecting books is waning, and it has dawned on me that the only books on my bookshelves, tabletops, nightstands, under beds, or in baskets, ought to be ones I’ve read and loved or those I’m pretty sure, God willing, I will still have time to read and love. Very little of my collection will bring my children any monetary windfall after the last RIP. But I would like to leave behind those books which have given me pause, those books which might say, “This is what your mother found important.”

More than ever I’m discovering the inter-connectivity between genres. That makes reading in bed nearly impossible as one book invariably leads to another which requires getting out of bed, regardless of the hour, turning on lights in another room to search for another book covering an amazingly similar event or person found in the first book. Case in point: Because of my interest in the role literature plays in American racism, I began reading for what I believed would be a children’s book review of T. R. Simon’s Zora & Me, The Cursed Ground (out in Sept. 2018).

Instead, what began as bedtime reading spilled over to three days of discovering more about Hurston’s youth and slavery’s ongoing damage to African Americans decades after the Civil War ended. While still reading Simon’s book, I pulled down off one shelf several books by Zora Neale Hurston and a few more on the Underground Railroad. Then, grabbing my laptop, I Googled the city of Eatonville, Florida, the amazing town in which the story takes place. On day number two, while looking at my shelves of U. S. History books, I came across Garry Wills’s book, Negro President, Jefferson and the Slave Power, a book I’d bought with every intention of immediately reading (the collector’s greatest lie) but did not.

So, beginning with a middle reader/YA novel about an African American novelist’s youth, then to other books written by that novelist, and finally to nonfiction, U.S. History books. Wills’s book stopped me in my book-chasing tracks: the U.S. Constitution’s “three-fifths” law? Huh? What was that? I certainly remember learning about our constitution and its amendments, but never given its due in any of my history classes or books was the importance of giving the South the edge in the House of Representatives by upgrading their “slave property” from nonperson to personhood (with no rights), that is, three of every five slaves were then countable as white males in the House, a count not given to members of the Senate. The end of the Civil War did little to assuage the hatred, fear, and distrust of blacks implanted in the South. But by that time, the power and influence under a Southern-controlled House of Representatives had already become part and parcel of our American heritage, a heritage seldom honestly-studied by generations of post Civil War Americans.

I’m not sure I want to disembark from the train Zora & Me, the Cursed Ground has put me on. Think of books arranged as steps taken to board a train. We have bought a nonstop ticket to a particular destination, but then find ourselves stopping at all manner of towns and cities along the way, sharing passenger space with strangers, all of us arriving at a destination none of us ever knew existed.   –  Sunny Solomon

The Decent Inn of Death