West with the Night 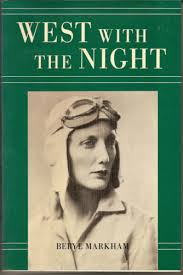 West with the Wind

Not long ago I reviewed Circling the Sun for “Bookin’ with Sunny.” Circling the Sun is Paula McLain’s fictional rendition of Beryl Markham, an early twentieth-century woman pilot who was as accomplished as Amelia Earhart.  At the time, I wrote that “the fictional Beryl Markham is absolutely life-like; her imagined story, absolutely real.”  Now I have just finished reading Markham’s own memoir, West with the Night, which personalizes the portrait so finely drawn by Paula McLain.  It, too, is absolutely life-like and absolutely real.

Markham begins with her youth in British East Africa (as Kenya was called in the early twentieth century), recounting how her father raised a daughter surrounded by horses and empty landscape.  She tells of encounters with wild animals, details how she ran free with the nearby native children, and explains how her love for horses expanded as she grew older.  Then she describes her career as a horse trainer, how she built a successful business.  Finally, she writes about her transition into flying, creating another successful business and growing ever more daring in the flights she takes.  Throughout, Markham thinks, acts, and flies solo, never acknowledging genuine closeness to another human being.  That’s the missing link in West with the Night, and the topic McLain extrapolates so profoundly in Circling the Sun.

I wanted to read West with the Night not only because I was curious about this very complicated woman but also because I knew about the literary controversy and unrestrained praise her book received.    Some critics and reviewers argued that the words must have been ghost written, perhaps by her third husband, Raoul Schumacher.  Others, sounding equally sexist, insisted that only a woman could have written West with the Night.  Ernest Hemingway was singular in his insistent enthusiasm.  “She can write rings around all of us who consider ourselves writers,” he famously observed in a letter to his editor, Maxwell Perkins.  “I wish you would get it (West with the Night) and read it because it is really a bloody wonderful book.”

I agree with Hemingway, the book is wonderful indeed.  Markham brings to life an Africa now lost to the past, when colonizers were first arriving and before wars began to tear the continent apart.  Markham describes an idyllic Africa, at least from her point of view, but that colonial attitude always remains respectful and affectionate.  She truly loves the countryside and its people, and her passionate sense of place appears on every page.  I’m not sure I’ve ever read a keener description of expatriate Kenya, although I must admit that some of her hunting treks and slaughter scenes are gross by twenty-first century endangered species standards.

For some reason I never knew of Beryl Markham’s feats or studied her prose.  She is one of those women of achievement whose accomplishments have faded into the past.  Paula McLain deserves our thanks for reintroducing this fascinating woman, but I recommend reading Beryl Markham’s own incantations about Africa, too.  Her words are wonderful, as Hemingway said, absolutely wonderful.   – Ann Ronald 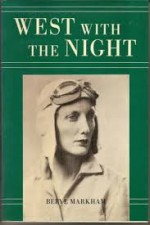 Ann Ronald is a retired English professor from the University of Nevada, Reno. Author of dozens of reviews, she’s also written a number of books about the American West. They include literary studies such as The New West of Edward Abby and Reader of the Purple Sage, cultural studies such as GhostWest and Oh, Give Me a Home, and nature writing such as Earthtones: A Nevada Album. Her latest is a work of fiction, Friendly Fallout 1953. Since retiring, she’s been reading vociferously, so “Bookin’ With Sunny” is giving her a wonderful opportunity to share thoughts about her favorite new discoveries.
More from this reviewer
PrevDeadly Secret of the Lusitania, a novel approach
Flora & Ulysses, a truly squirrelly novelNext