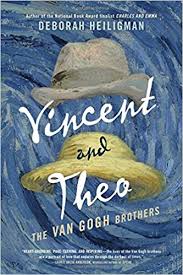 Deborah Heiligman has written an extraordinarily creative biography. Not only does Vincent and Theo portray the van Gogh brothers’ close personal affinities, it also mirrors their convergent artistic visions. Heiligman’s prose, her syntax and diction, her imagery, even the design of her book all reflect Theo’s impressionistic enthusiasm and Vincent’s bold chiaroscuro palette. Reading Vincent and Theo is like walking through an intimate gallery of late nineteenth-century art.

Because the van Goghs were prolific letter writers and because all that correspondence was preserved, much is known about the parallel lives of these two complicated men. From their earliest years, they communicated faithfully. Vincent, quite probably suffering from bipolar disorder, needed the stability of his younger sibling. Theo, gainfully employed and more firmly grounded in reality, supported his highly erratic brother through good times and bad. The traumatic episodes in Vincent’s life, his multiple break-downs and his many attempts at self-destruction, are well-known. Theo’s personal sacrifices and his own final descent into madness caused by syphilus are well-recorded too. But Heiligman gives their relationship a graphic level that I have not previously seen.

She piles on the words in the same way Vincent would overlay his paint, using catalogue imagery (a host of colors, a collection of trees, a list of flower names) to show how Vincent’s art progresses. “Vincent is painting up a storm. He is a storm. For most of June and July he paints landscapes, thick with impasto, textured, colorful. By the end of the summer he’s made more than thirty-five landscapes: wheat fields, orchards, vineyards; ocean scenes, streets, and cottages.” Then Heiligman adds, “textured fields and skies and flowers and trees and houses in blues and oranges and yellows and pinks and whites and greens and reds.”  Through language, she recreates the painterly frenzy of Vincent’s most productive years.

Through syntax, she also draws the reader into the brothers’ intimacy. She writes Vincent and Theo almost entirely in the present tense. The effect is what literary critics call the ‘continuous present,’ a heightening of the moment that brings the reader into familiar contact with whatever is happening in the lives of the characters. Effective, too, is the way she weaves the brothers’ own words into her paragraphs. Whenever possible, she lets Vincent and Theo speak for themselves, although she remains in firm control of her narrative line. Often that narrative line is presented in single paragraphs, as if Vincent were lining out a scene. For example, she presents Theo in numbered “croquis,” verbal sketches analogous to rough drawings, the way Vincent would see his brother posed.

Besides the obvious artistry that Heiligman captures, she also focuses on the psychological interplay between the van Goghs. In one letter Vincent describes their relationship as more than brothers, more than friends—they are “companions in fate.”  Heiligman perfectly captures that sense of fatality. Vincent and Theo spiral inevitably toward early deaths, Vincent consumed by his madness and Theo destroyed by disease. Even such chaos is displayed in painterly strokes, as this very fine biographer concludes their demises in artistic fashion. “Vincent died in Theo’s arms.” In the past tense, fatally and irrevocably. “Theo dies alone.”    – Ann Ronald

Vincent and Theo: The van Gogh Brothers is another case of a YA (young adult) book that should be in every art lover’s hands, no matter the age. 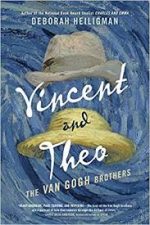 Ann Ronald is a retired English professor from the University of Nevada, Reno. Author of dozens of reviews, she’s also written a number of books about the American West. They include literary studies such as The New West of Edward Abby and Reader of the Purple Sage, cultural studies such as GhostWest and Oh, Give Me a Home, and nature writing such as Earthtones: A Nevada Album. Her latest is a work of fiction, Friendly Fallout 1953. Since retiring, she’s been reading vociferously, so “Bookin’ With Sunny” is giving her a wonderful opportunity to share thoughts about her favorite new discoveries.
More from this reviewer
PrevThunder in the Mountains
The Twelve Lives of Samuel HawleyNext