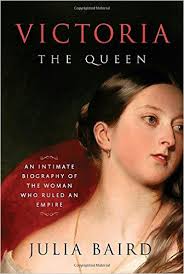 VICTORIA THE QUEEN: AN INTIMATE BIOGRAPHY OF THE WOMAN WHO RULED AN EMPIRE

The inevitable question I am asked: is the TV series recently aired on PBS, Victoria, historically accurate? My typically tart answer: if you want to study history don’t watch movies. In this case, I recommend reading Julia Baird’s new biography, Victoria the Queen.

Since Victoria reigned (but did not rule) for sixty-four years as a constitutional monarch of the wealthiest, most industrialized, and largest empire in the world, any biographer of Queen Victoria has to be selective. In this case, Baird suggests in the subtitle that her main theme will be “intimate,” perhaps alerting the reader that her private life will be emphasized more than her public life.

While Victoria’s private life is examined in some detail, including her fondness for cuddling with Price Albert, Baird is an astute historian. She embeds those intimate episodes into the public events that make the 19th century endlessly fascinating: a series of political reforms that transformed Britain slowly into a democracy, the Crystal Palace Exhibition of 1851, the Crimean War, social reform movements that affected nearly every social level in the country, the Indian Rebellion of 1857, the titanic struggle between prime ministers Disraeli and Gladstone, and the interminable troubles with the Irish to name a few. In addition, Victoria, as queen and emperor, had some role in all of these events.

As intimate as this biography may be, Victoria was a public person to some extent even before she became Queen. After her beloved husband, Prince Albert, died in 1861 at the young age of 42, Victoria retreated from public view although she continued to fulfill her day-to-day working duties as queen. (She routinely worked through a hundred official dispatches or more each day.  She wrote voluminously averaging some 2500 words per day during her reign.)  When her mourning dragged on beyond what opinion makers considered appropriate, she was roundly criticized in print for ignoring her public responsibilities.  “Why are we spending all this money on her and her family if we can’t see her?”  Republican (anti-monarchist) sentiments grew during the time and only subsided after she abandoned her reclusive habits.

The popular connotations of “Victorian,” a term derived from Queen Victoria’s reign, 1837-1901, have to do with respectability, strict morality, conformity, prosperity, middle-class values, the virtues of hard work, and improvement. While Victoria exemplified or came to exemplify some of aspects of Victorian, Baird makes it plain that her husband, Prince Albert, was more of a Victorian than Victoria. Historically, Princes and Kings have routinely taken mistresses, “a bit of irregular pleasure,” in the words of King Charles II, Prince Albert was faithful, a family man, intellectually curious, and a workaholic reformer. He was a bit of prig, unlike his wife who admired and was titillated by masculine beauty for most of her life.

Why wasn’t Albert king of England?  There have been six British Queens beginning with “Bloody” Mary who have inherited the throne.  Only one of them, Queen Mary II (of William and Mary), had a husband who was also fully king of England.  It’s an intriguing question that Baird only partially answers.

The last full-length biography of Victoria I read prior to Baird’s was Elizabeth Longford’s Queen Victoria: Born to Succeed—about fifty years ago. While it was a revealing and insightful biography, historical scholarship has changed. Baird’s biography includes many new discoveries and interpretations. The reader who is fresh to Queen Victoria will find this biography enchanting. I, too, was enchanted but also impressed and thrilled by how well Baird synthesizes the old with the new. Victoria’s story has the grandness and pageantry of the British Empire in full bloom; Baird is clearly up to the task.   –  Neal Ferguson 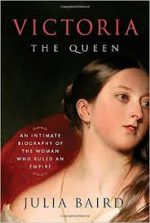 Neal Ferguson is a self described Anglo-phile. After studying for a PhD in British history and doing research for a year in various British archives, he came to the University of Nevada in 1970 to teach. Soon he found himself in administration where he remained until 2003. After returning to full-time teaching a decade ago, he decided to concentrate his teaching energies on Medieval British history and various global aspects of World War II. Dedicated to Ambrose Bierce’s proclamation that the purpose of war is to teach Americans geography, Neal insists that his students accompany him (in class) to sundry east European rivers and steppes, African deserts and jungles, south-east Asian mountain ranges and peninsulas, and small islands and coral reefs in the Pacific. Currently he is writing a book about the ups and downs of General Douglas MacArthur’s military reputation.
More from this reviewer
PrevLillian Boxfish Takes a Walk
Born a CrimeNext