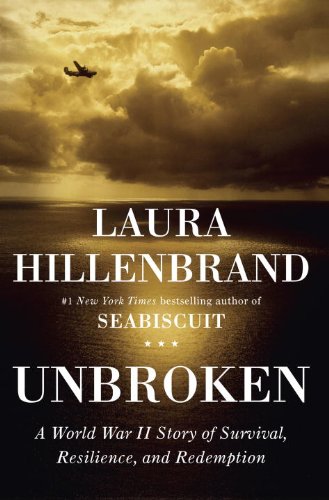 Hillenbrand is back with another gut wrenching, heart-stopping story of stamina, resilience and survival; but unlike her earlier bestseller, “Seabiscuit,” “Unbroken” tells the story of a two-legged runner, one Louis (Louie to all but his mother) Zamperini. Hillenbrand is a master at writing a rich and compelling back-story, giving historic events an immediacy not often achieved. Zamperini, the wild kid who would eventually run his way out of a life of petty delinquency in Torrance, California, and into the record books as a high school and college distance runner, became an unlikely member of the American team in Berlin at the 1936 Olympics.

Hillenbrand paints a wide canvas, including broad strokes like Zamperini’s amazing records set throughout his high school and college career (USC), and details like his brother, Pete, cajoling him to train and take himself seriously as a distance runner. We see the kid take off from home, packing one sandwich from his mom and two bucks from his frustrated dad, to hop the rails with a few friends, returning only after leaping off a moving train. It was jump or wait to see if the officer with a gun pointed at them would really shoot. We get to know his family, his teachers, his buddies and girlfriends and the admiring townsfolk who nicknamed him the Torrance Tornado.

Zamperini dreamed of taking part in the 1940 Olympics, slated for Japan. But by 1937 the Rape of Nanking had occurred and two years later the same man who shook Louie’s hand in Berlin would march an army into Poland. Japan withdrew as host of the 1940 Olympics and the United States activated its draft. Zamperini was fast, but even he could not outrun world events pushing their way into the hopes and dreams of an entire generation of young men and women. By the time Japan bombed Pearl Harbor, Louie was training as a bombardier with the U.S. Army Air Force in Texas.

Hillenbrand gives as much life and complexity to the B-24s, the aircraft most often flown by Louie, as she does to Louie’s fellow airmen. She also makes use of shocking statistics of downed planes and crews, lost not by enemy fire, but by accidents born out of the B-24s’ deficits in design. Zamperini flew in the Pacific, a field of war in which downed crewmen’s odds of surviving ocean sharks were about the same as of surviving life in a Japanese POW camp. She quotes an ordnance officer on Oahu, who put it succinctly, “Life was cheap in war.”

We know upon opening this book that Zamperini goes down with his plane, but we hold our breaths each time he takes off. Is this the one? Hillenbrand’s powerful descriptions of the bombings and returns from Wake and Nauru are almost cinematic, and her depiction of life in a Japanese POW camp has the up close and very personal feel of a horror film. The will and determination of Zamperini the runner are the same traits called upon to survive his near extermination as a Japanese POW.

Interspersed between battle and POW stories is news from home. Upon being told her son was missing in action, Mrs. Zamperini developed a rash that persisted until Louie returned home. Hillenbrand writes of the intimate moments of grief expressed by Zamperini’s family and the families of his friends and neighbors. His survival, not just of the camps, but also of the war experience itself, is what makes this book so compelling. It was a long and tough journey, and one that Hillenbrand asks us to take with him. This is narrative history at its best. 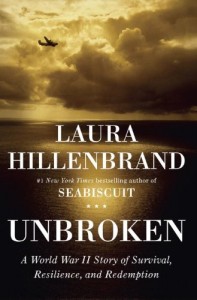 Sunny Solomon holds an MA in English/Creative Writing, San Francisco State University. She is a book reviewer for “The Clayton Pioneer” and her poetry and other writing has been published in literary journals, one chapbook, In the Company of Hope and the collection, Six Poets Sixty-six Poems. She was the happy manager of Bonanza Books, Clayton, CA and Clayton Books, Clayton, CA. She continues to moderate a thriving book club that survived the closure of the store from which it began. Sunny currently lives next to the Truckee in Reno, NV.
More from this reviewer
PrevThe Measure of His Grief
A MercyNext