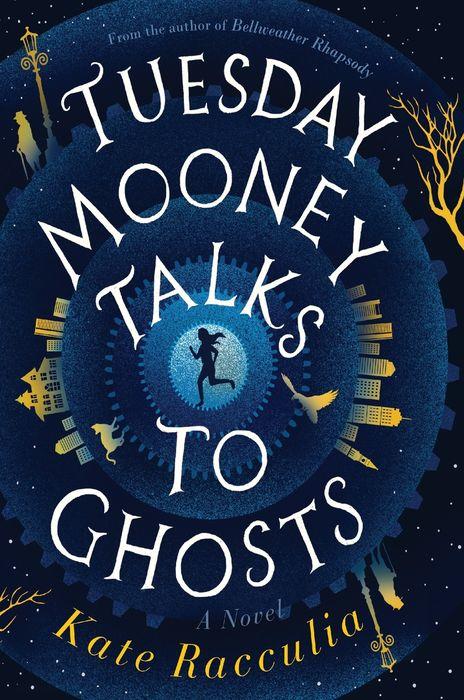 Ever since I finished reading Kate Racculia’s novel, Tuesday Mooney Talks to Ghosts, I’ve been trying to imagine a literary genre it might fit. Nothing worked, so I made up my own. “Gothic romp”—an extraordinarily witty caper that blends Edgar Allan Poe with Frankenstein with Vincent Price with Alice in Wonderland and Dr. Jekyll and Mr. Hyde, and countless more dark legendary figures, all cloaked in hilarious prose. Racculia must have had great fun creating her characters and imagining their antics; I certainly had great fun reading her words.

Her heroine, Tuesday Mooney, is a Gothic girl living in modern times. Pale skinned and cloaked in black attire, she slinks alongside several other memorable ghoulish souls. Separately and sometimes together, they’re trying to solve a mystery set up by Vincent Pryce, an eccentric billionaire who devised a treasure hunt to be pursued after his (natural) death. The clues are Machiavellian, requiring not only a broad knowledge of literature and the occult but also a deep knowledge of Boston and its environs. Tuesday Mooney Talks to Ghosts, step by step, follows those clues, sometimes with great leaps of faith and often with shrewd intuition.

I’ll give you some hints. One clue takes Tuesday deep into the Park Street Station of the Massachusetts Bay Transit Authority. Another involves the birthplace of Edgar Allan Poe. Some of the action occurs at Vincent Pryce’s “costume-required” funeral. More evil excitement takes place in a musty mansion with falling plaster and a mysterious past. There’s even a character nicknamed “Rabbit,” who propels the action forward (and into metaphoric rabbit holes) whenever he can. And, of course, Racculia has left literary clues for the reader, too. I kept dredging my memory for old associations in nineteenth-century Gothic novels I read dozens of years ago. A character might suddenly remind me of someone in The Moonstone or The Tenant of Wildfell Hall. Except Tuesday and her friends are more entertaining, and definitely are having more fun.

Readers like me, who have always enjoyed Gothic fiction and who relish DaVinci Code puzzles and literary double entendres, will thoroughly enjoy Tuesday Mooney Talks to Ghosts. I don’t know when I’ve read a novel that amused me so. It’s smart, it’s hysterically funny in places, its Bostonian sense of place is archaically accurate in especially picturesque ways, it’s Gothic to the core. Readers less attuned to Gothicism both factual and fictitious might not be as amused by Tuesday and her eccentric escapades, but Tuesday Mooney Talks to Ghosts certainly captivated my inner Rebecca. How could I resist a novel with an opening paragraph like this one?

“The Tillerman house was dead. Over a century old, massive, and stone. It lay slumped on its corner lot, exposed by the naked December trees and shrubs growing wildly over its corpse. It was ugly, neglected, and despite its size, withered, a black hole of a house. If the real estate agent were the kind of person who ascribed personalities to properties—he was not—he would have said it was the loneliest house he had ever sold.”   – Ann Ronald

Also available by Kate Racculia: Bellweather Rhapsody; This Must Be the Place. 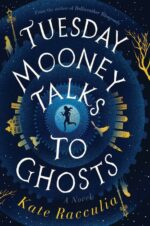 Ann Ronald is a retired English professor from the University of Nevada, Reno. Author of dozens of reviews, she’s also written a number of books about the American West. They include literary studies such as The New West of Edward Abby and Reader of the Purple Sage, cultural studies such as GhostWest and Oh, Give Me a Home, and nature writing such as Earthtones: A Nevada Album. Her latest is a work of fiction, Friendly Fallout 1953. Since retiring, she’s been reading vociferously, so “Bookin’ With Sunny” is giving her a wonderful opportunity to share thoughts about her favorite new discoveries.
More from this reviewer
PrevThese Precious Days
The Vanishing HalfNext