To Engineer is Human – The Role of Failure in Successful Design 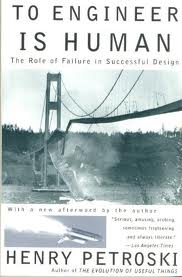 The complete title of this amazing book is To Engineer is Human, The Role of Failure in Successful Design. I’m pretty sure all of you structural engineers, or any other type of engineers for that matter, have already read this Petroski title, but for everyone who is not yet acquainted with Professor Petroski – especially all you writers – this is a must read. There’s one other group of people out there who also might be interested: anyone who’d rather not fly, cross long suspension bridges or live too close to a dam.

Henry Petroski is a professor of engineering and history at Duke University. He is also one very terrific writer who has a lot to say in this book about design failure in the world of successful structural engineering. To Engineer is Human is a book for all of us who’d like to know a little more about those bridges that collapsed, planes that fell from the sky, buildings that needed shoring up or any of the other mysteries of failure that haunt us all. Maybe you’ve always wondered why you failed that one exam you thought you had nailed; what the heck, Petroski may even give you some insight as to where to look for the reasons your marriage failed or even how to take a second look at that poem that refuses to stay put on the page.

Petroski’s opening clearly states what he and this book are about: “I believe that the concept of failure – mechanical and structural failure in the context of this discussion – is central to understanding engineering, for engineering design has as its first and foremost objective the obviation of failure.” Obviation is a big word in this book and one which I can now use with great aplomb.

Petroski’s use of the history of great structural designs, the pyramids, Gothic cathedrals, famous bridges, is just one of the ways he takes the reader into an up close and personal encounter with structural engineering. Where was he when I needed him in high school to explain the relationship between theory, hypothesis and fact? The clarity of his writing and the no-nonsense way the book is put together (all right, designed) makes it wonderfully worth the read. The copy I read for this review was the 1992 updated edition (originally published in 1985); the reader travels from the pre-pyramids of 2700 B.C. to early 1990s computer design, including occasional interludes into the lives and works of some relevant and fascinating literary figures.

The book covers the structures themselves and the elements of their building materials, and, toward the end, takes a very eye-opening look at the way in which structural failures are investigated by all the bodies politic, economic, and design, both before and after the accidents. Petroski’s take on the use of computers for design is a bit unnerving: “And as more complex structures are designed because it is believed that the computer can do what man cannot, then there is indeed an increased likelihood that structures will fail, for the further we stray from experience the less likely we are to think of all the right questions [my emphasis].”

To Engineer is Human is science, art and always enlightening. Who else but Petroski could include the pyramids and a narrative poem by Oliver Wendell Holmes; the history of the first steel-reinforced concrete and a novel by Nevil Shute that would serve notice to an industry on the necessity of vigilant maintenance? This was Petroski’s first book and those that followed continue to capture the imagination of engineers and laypeople alike. Join the crowd; you’re in good company.     – Sunny Solomon

Also available from Petroski: To Forgive Design: Understanding Failure; The Evolution of Useful Things; Invention by Design, How Engineers Get from Thought to Thing; The Pencil; The House with Sixteen Handmade Doors; Success through Failure; The Book on the Bookshelf; An Engineer’s Alphabet; Design Paradigms; Engineers of Dreams; The Toothpick, Technology and Culture; Small Things Considered; The Essential Engineer; Pushing the Limits; Paperboy, Confessions of a Future Engineer; Remaking the World;.

Sunny Solomon holds an MA in English/Creative Writing, San Francisco State University. She is a book reviewer for “The Clayton Pioneer” and her poetry and other writing has been published in literary journals, one chapbook, In the Company of Hope and the collection, Six Poets Sixty-six Poems. She was the happy manager of Bonanza Books, Clayton, CA and Clayton Books, Clayton, CA. She continues to moderate a thriving book club that survived the closure of the store from which it began. Sunny currently lives next to the Truckee in Reno, NV.
More from this reviewer
PrevA Skeptic’s Guide to Writers’ Houses
Vaclav & LenaNext