From werewolves to weretigers, Tiger’s Curse takes a new spin on the shape-shifting love interests for which young adult paranormal romances are becoming so popular. Tiger’s Curse by Colleen Houck is the next teen fantasy sensation to hit lockers, nightstands, and yes, even office desk drawers. Houck has described her paranormal romance as Indiana Jones meets Twilight, an appropriate analogy for her debut novel.

Tigers Curse follows the story of Kelsey Hayes (recently orphaned when her parents were killed in a car accident), a lonely high school graduate off to work for the circus the summer before her freshman year in college. Kelsey soon finds that the circus’ main attraction, Dhiren, a white Bengal tiger, is not your normal National Geographic tiger. Kelsey is strangely drawn to the impressive animal and often spends her free time reading to Dhiren from Shakespeare’s Romeo and Juliet, as well as reciting poetry, for which the animal shows much interest. A strong bond forms between the two so when Kelsey is invited to help transport Dhiren to a wildlife preserve in India, she accepts.

Kelsey also befriends Mr. Kadam, the mysterious businessman who has purchased the tiger and is charged with transporting  Dhiren to the wildlife preserve. Mr. Kadam entertains Kelsey with many stories and myths from his native country while they travel to India and she soon discovers that her tiger, whom she affectionately refers to as Ren, is actually an ancient Indian prince from one of Mr. Kadam’s stories. Nearly three hundred years ago Ren was cursed by an evil sorcerer named Lokesh. Ren was betrayed by his fiancée, Yesubai, and his younger brother, Kishan, who had stolen her heart while Ren was away defending their kingdom. Kishan handed over Ren to Lokesh in a deal that would guarantee him Yesubai’s hand in marriage and a partnership in ruling Ren’s kingdom. However, like all evil sorcerers, Lokesh did not stand by his word and quickly cursed both of the brothers, transforming Ren into a white tiger and Kishan into a black tiger for all eternity.

Kelsey’s adventure begins the moment she sets foot in India. Determined to break Ren’s curse, she seeks out the help of an Indian goddess named Durga. Through Durga’s guidance, Ren and Kelsey find themselves lost in temple mazes, stuck in the middle of jungles, fighting off evil mythical creatures and piecing together riddles to get ever closer to earning Ren’s freedom.

Tiger’s Curse is entertaining from beginning to end. Unlike many other young adult novels I’ve managed to trudge through, the heroine, while nowhere near perfect, is not apt to whine, nor is she completely helpless and dependent on the main male characters. Preferring action over romance, this tale still has plenty of tender moments preceded by intense conflicts that kept my attention riveted to each page. Houck has done her research so that readers experience India’s local cuisine, hear the Hindi language and enjoy local Indian customs.

I should give a word of warning for those of you that decide to pick up and start reading this series: Be prepared to purchase a giant stuffed white tiger. After making it through half of Tiger’s Curse, I found myself online searching for my own stuffed blue-eyed tiger (who I named Dhiren) to squeeze for the next three books in the Tiger’s Curse series.      – Aubrey Siino

Bookin’ with Sunny is a strong supporter of Independent Bookstores and Public Libraries. 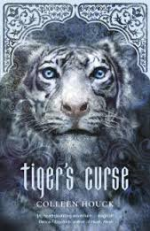 Aubrey Siino holds a BA in English Literature and two minors, Spanish and Women's Studies, University of Nevada Reno. She is a content writer for HerWeddingFavors.com. Aubrey is currently working on three of her own children's picture books. She lives with her family in Reno, NV.
More from this reviewer
PrevMrs. Letsaveit
The Stranger’s ChildNext