Home » Reviews » The Year of the Hare

The Year of the Hare 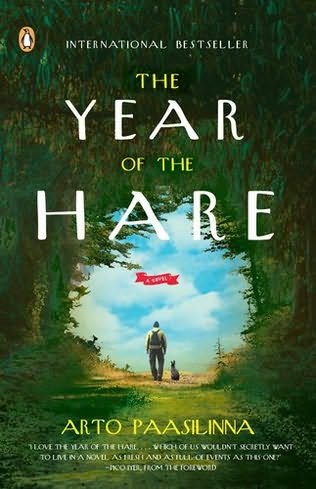 The Year of the Hare is a perfect winter book. Get the fire going, pull up a comfy chair, a good reading lamp, a table of some sort with enough surface to hold a good snifter of brandy (my choice, pick your own) and settle down into what will surely be one of the most satisfying and entertaining reads of the new year. Never mind that Paasilinna’s novel has been in print since 1975, in almost every language but English, let’s just toast Penguin Makes Paperbacks for getting it out now, and appropriately so in 2011, the Chinese Year of the Hare.

Arto Paasilinna, master Finnish storyteller, takes charge with his opening salvo: “Two harassed men were driving down a lane.” He goes on: “It was midsummer, but the landscape on this sandy byroad was slipping past their weary eyes unnoticed . . .” The two men, a journalist and photographer no longer on the best of terms with each other, are on their way home from a magazine assignment. It is more than scenery slipping past them, but this is only realized by Vatanen, the journalist, and only after their car, driven by the photographer, strikes a young hare that has been practicing its leaps in the middle of the country road. The hare bounces off the car, is thrown out of the roadway, and disappears into the forest. Vatanen goes after the injured animal. Neither returns.

Even in Finland men have midlife crises, and when Vatanen finds himself in a beautiful forest with a young hare to look after, it does not take long before he knows he will not go back to his job, his wife, or Helsinki. Thus begins an odyssey for the reader to take into any winter night; however for Vatanen and the hare it is still mid summer and they have miles to travel before winter sets in.

The hare is taken to a vet and attended to, and, while still small, it happily takes up residence in Vatanen’s coat pocket. Knowing that no escape from life is successful without proper planning, Vatanen finds a village with a phone and a bank. He calls a friend in Helsinki, offering to sell him his boat and instructing the fellow to give almost half the money to his wife and to wire the rest to the bank. On the day Vatanen goes to pick up the money, he discovers that his friend has brought not only the money, but also both his wife and boss, all three determined to drag him back to his old life. The fact that Vatanen, with hare in tow, is able to outfox these people confirms the steadfastness of our hero.

From there on out, everything is pure magic. Paasalinna mixes reality with enough madcap bedlam to carry the reader into every misadventure the pair happens upon. We follow dizzily as they encounter a ravenous raven, a bureaucratic nightmare of licensing, a disastrous state dinner, the ravishing Leila, judiciously content to be engaged to Vatanen until a divorce can be obtained, a wild bear hunted across the Soviet border, and finally the Soviet courts, which satisfied that Vatanen and the hare are not Finnish spies, agree to send them back to Finland to face a myriad of charges regarding Vatanen’s reckless disregard of all things related to bear hunting.

Vatanen is imprisoned. And the hare? Well, for a while they are both imprisoned. Then they are not. How did Paasilinna do that? How does anyone escape anything? It’s easy: Pick up the book, pull the comfy chair up to a good reading lamp and… well you understand. 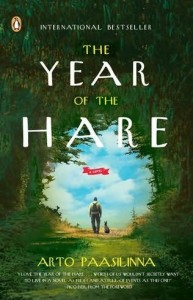 Sunny Solomon holds an MA in English/Creative Writing, San Francisco State University. She is a book reviewer for “The Clayton Pioneer” and her poetry and other writing has been published in literary journals, one chapbook, In the Company of Hope and the collection, Six Poets Sixty-six Poems. She was the happy manager of Bonanza Books, Clayton, CA and Clayton Books, Clayton, CA. She continues to moderate a thriving book club that survived the closure of the store from which it began. Sunny currently lives next to the Truckee in Reno, NV.
More from this reviewer
PrevMr. Chartwell
Friendly Fallout 1953Next