The Various Flavors of Coffee 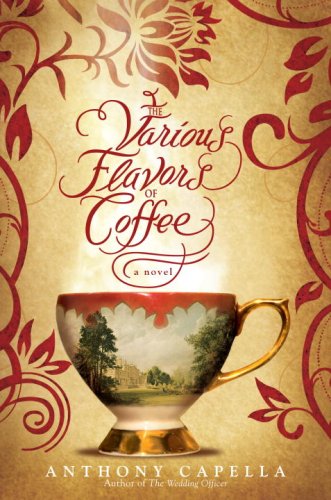 The Various Flavors of Coffee

Sort of a silly name for this sprawling, romantic, historical, blockbuster of a novel. The Various Flavors of Coffee is English writer Anthony Capella’s third novel. His first, The Food of Love was a worldwide success and his second, The Wedding Officer is soon to be released as a movie. I have not read either, but I’d bet a double shot latte that The Various Flavors is his best.

The narrator grabs us on page one and doesn’t let go until 545 pages later. “Who is he, this young man who strolls toward us down Regent Street, a carnation in his collar and a cane in his hand?” The narrator continues with asides suggesting a very frivolous, artsy fellow. The hook is when he says, “Come along; I am going to introduce you. Yes, I admit it – I know this ludicrous young man, and soon you will know him, too.” And know him we will, for the narrator is describing himself as he appeared in the year 1896, fresh from being expelled from Oxford and convinced the world will soon be beating a fevered path to his poetic door.

His name is Robert Wallis and by the time we have had our first cup of coffee with him, we know he will never reach the poetic heights he dreams of. We also meet in the same café the coffee trader, Samuel Pinker, who will become his boss and will set him off on a life changing adventure. But the adventure doesn’t begin until Robert meets Samuel Pinker’s daughter, Emily, who works in her father’s coffee business. So, here we have a dandy, a businessman, and a beautiful, want-to-be thoroughly modern woman. And like a perfectly brewed cup of coffee, we have all the ingredients for a robust and most satisfying story.

Capella makes the business of coffee trading captivating; he takes us into the origins of much of our own modern business practices from the psychology of advertising to the machinations of the wheeler-dealers of the stock market. As a means of thwarting Robert’s desire to marry Emily, Pinker wheedles an agreement with him to travel to Africa (accompanied by another memorable character, a Scotsman who is explorer, exploiter, and ultimately doomed fellow employee) where he will establish a coffee plantation on property the size of London. In four years time, if the plantation is profitable, Robert may return to London and marry Emily.

Profitability can be in the eye of the beholder. Robert, but not the plantation, profits in ways he could never have imagined. He returns home after experiencing a life changing affair with another man’s beautiful slave; his shame at being unable to save the leopard-mauled Scotsman; and his inability to deal with the laborers who are only a hatchet and hoe away from slavery themselves. His final indelible mark of change, is a tattoo, proving tribal membership to the people who bring him back from the brink of insanity. Robert returns to England and broken promises, but it is there in the early years of the twentieth century where his second adventure begins.

It is a big book and I will not divulge any more than than the fact that Capella is a genius is in his ability to make us care, to laugh (big time), to cry, to be amazed and ultimately to be rewarded with a tale that ends in growth, understanding and love, which he suggests comes in almost as many flavors as coffee. 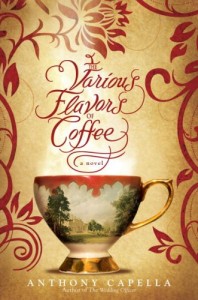 Sunny Solomon holds an MA in English/Creative Writing, San Francisco State University. She is a book reviewer for “The Clayton Pioneer” and her poetry and other writing has been published in literary journals, one chapbook, In the Company of Hope and the collection, Six Poets Sixty-six Poems. She was the happy manager of Bonanza Books, Clayton, CA and Clayton Books, Clayton, CA. She continues to moderate a thriving book club that survived the closure of the store from which it began. Sunny currently lives next to the Truckee in Reno, NV.
More from this reviewer
PrevMr. Pip
So Brave, Young and HandsomeNext