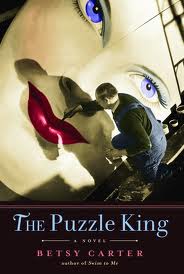 Occasionally I read a book that’s just too short. That’s the problem with Betsy Carter’s The Puzzle King. It could easily be fifty or a hundred pages longer. On the plus side, that leaves a lot to the reader’s imagination. After I finished this novel, I found myself tracing further encounters and future episodes, picturing her characters moving through time and space. There was just so much more that Carter could have told us. But that’s not the point of The Puzzle King. Carter’s intention, I think, is to set her characters loose at a particular historic moment, to send them out into a world where who they are will determine what they accomplish. If Carter has drawn them wisely, and she has, those fictional men and women will cope successfully. The author doesn’t need to cross her t’s and dot her i’s.

The story begins when two Jewish mothers, living in Germany and Lithuania as World War I draws to a close, decide to send some of their children to America to make new lives for themselves. Simon arrives in New York alone, and must make his way solely on his own talents as an artist and a creative spirit. Flora comes with her sister Seema, and settles comfortably with her aunt and uncle in a nearby suburb. As a reader might predict, Simon and Flora come together in an unlikely pairing of a plain, short man with a beautiful, tall woman who turns men’s heads, who towers over her husband, and who absolutely adores him.

The novel depicts their lives together in America as unrest turns Europe into chaos. Because Simon is financially successful, they’re able to visit Germany often in the 1920s and in the 1930s, able to witness the societal disruption first-hand. So the reader can compare their affluent lives with the existences of Flora’s relatives left behind, can feel their frustration at a familiar world disintegrating before their very eyes.

The Puzzle King is based on fact. The author’s great aunt and great uncle not only were very like the fictional Simon and Flora (like Simon, the original Morris invented the way to mass produce jigsaw puzzles, and hence became known as America’s ‘puzzle king’), but they interacted with their less fortunate German kinfolk in similar ways. Instead of drawing direct one-to-one correspondences, however, Carter fleshes out her characters with her imagination, then leaves the reader to assume or predict what will happen next. Taking Simon and Flora and Seema to the brink of World War II, she stops short of making their stories a fairy tale come true.

They live in a flesh and blood world. Or worlds—the New York of the immigrant experience, which is rendered in colorful and touching detail, and the Germany of their Jewish relatives, where every day brings new difficulties and new despairs. But as I said at the outset, The Puzzle King stops short of spelling out the future. It’s not about World War II, only about the processes leading up to the chaos. It’s not about the horrors, only about the signposts leading the way. Re-envisioning a world in increasing disarray, it portrays one family’s set of experiences rendered with altruism and loving care.   -A.R.

The Puzzle King 2010 is available in paper and eBook, as are two other Carter titles: Swim to Me 2007 andThe Orange Bloossom Special 2006.

Sunny Solomon holds an MA in English/Creative Writing, San Francisco State University. She is a book reviewer for “The Clayton Pioneer” and her poetry and other writing has been published in literary journals, one chapbook, In the Company of Hope and the collection, Six Poets Sixty-six Poems. She was the happy manager of Bonanza Books, Clayton, CA and Clayton Books, Clayton, CA. She continues to moderate a thriving book club that survived the closure of the store from which it began. Sunny currently lives next to the Truckee in Reno, NV.
More from this reviewer
PrevA Field Guide to Getting Lost
The Unlikely Pilgrimage of Harold FryNext