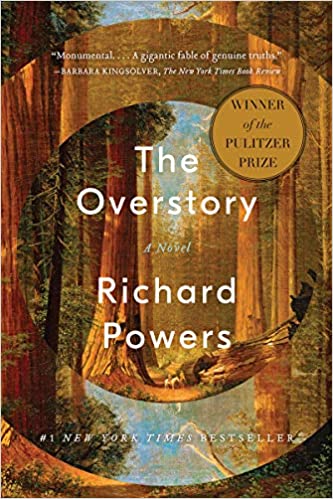 A powerful novel of environmental concepts.

During the decade before I retired, I often taught “Environmental Literature,” a capstone course for graduating seniors. Now, when I read a particularly thoughtful book about current land use issues, I wish I could talk with those eager students about how environmental concepts have advanced, or not, in just ten years. Richard Powers’ The Overstory is one such novel, a powerful indictment of an unregulated timber industry and an in-depth consideration of how angry activists can succeed and fail. The book is about endurance, too, the ways people and places manage to survive, or not, in the short term and over the course of generations.

The Overstory opens by introducing nine individuals, giving each a chapter-length personal understory that situates the person in time and that roots his or her affinity for trees. Their backgrounds and their interests vary greatly, from artist to scientist, to shell-shocked vet, to flighty co-ed, to computer guru, to free-spirit, to lawyer, to psychologist, to engineer.  Only two know each other at the outset, while the rest lead separate lives. The Overstory then brings these four women and five men together, sometimes physically but often in more abstract, philosophical ways.  At times, indeed, this is an almost self-consciously philosophical novel, one written to make the characters and the readers reassess their values and the way they live their lives.

I imagine the environmental conversations my hypothetical class might exchange, the questions the book asks, and the answers my students might give. If a trajectory of sound science exists, why don’t humans pay attention?  What are corporate responsibilities to the environment? When is civil disobedience appropriate? Are monkeywrench tactics ever acceptable? How and why does peaceful protest turn violent?  What is the psychology of protest?  Conversely, what is the psychology of acquisitive behavior? What allegiance do humans owe the natural world? What allegiance do humans owe each other?   Can opposing value systems peacefully co-exist?

Powers abstractly articulates such questions, but he also embeds those critical issues in fertile soil’  His characters are complex men and women, with shifting notions of responsibility and accountability’  Each is somewhat eccentric but nonetheless grounded, so a reader is entranced by their personalities and the actions that result. They make scientific breakthroughs, they sit in trees to prevent clear-cut logging, they love, and they despair. I couldn’t guess where the plot might lead next or how Powers would connect the disparate dots. By the end of the book, I was satisfied but uneasy. Exactly as Powers intended, I believe.

Thus would a professor lead a discussion about The Overstory’s subject matter. I would also want to point out the literary aspects of this well-written artistic creation. The title’s double entendre, which brings the lives of both trees and characters together, hints at the care with which Powers chooses his words. He is equally painstaking with his narrative design, for The Overstory itself is patterned like an ancient forest, redwood or Douglas fir.  First, the “Roots” develop the background vignettes that introduce each individual. Part Two, “Trunk,” interlocks their disparate destinies and grows their actions into a stunning denouement. I was startled by the climactic ending of “Trunk,” just two-thirds of the way through the novel, because the next section, “Crown,” seemed almost lethargic by comparison, slowly tracing years of each character’s maturation and subsequent decline.  Then I realized that, like an old-growth tree, they and the novel’s plot come to fruition and then slowly decay, turning into nurse logs for the surrounding forest of ideas and personal behavior. Organically, “Seeds” culminates the book’s thinking, leading the reader toward possible futures, planting food for thought and bringing new life.

Bookin’ with Sunny enthusiastically supports and urges readers to return to their local independent bookstores. 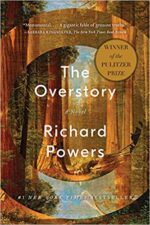 Ann Ronald is a retired English professor from the University of Nevada, Reno. Author of dozens of reviews, she’s also written a number of books about the American West. They include literary studies such as The New West of Edward Abby and Reader of the Purple Sage, cultural studies such as GhostWest and Oh, Give Me a Home, and nature writing such as Earthtones: A Nevada Album. Her latest is a work of fiction, Friendly Fallout 1953. Since retiring, she’s been reading vociferously, so “Bookin’ With Sunny” is giving her a wonderful opportunity to share thoughts about her favorite new discoveries.
More from this reviewer
PrevGrim Honey
The President is MissingNext