Home » Reviews » The Opposite of Fate

The Opposite of Fate 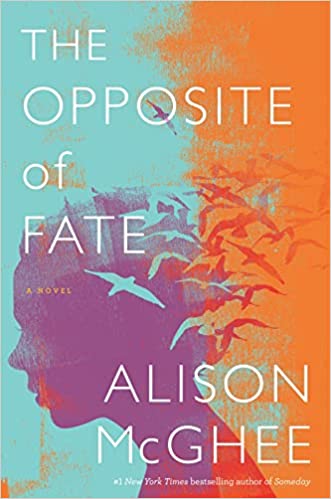 The Opposite of Fate – Rape, a resulting pregnancy, and a 16-year coma. Alison McGhee stretches the reader’s emotional imagination in profound ways.

Alison McGhee’s novel, The Opposite of Fate, follows what happens to a young woman, Mallie Williams, who is beaten and raped. After the assault, she remains unconscious for sixteen months, unaware of anything happening around her. The cover blurb suggests the book’s contents: “The rape has left Mallie pregnant, and while some friends are convinced that she would never keep the pregnancy, others are sure that a baby would be the only good thing to come out of all this pain. Who gets to decide?” When I read that, I was certain I was about to read a pro-life/pro-choice novel based on political arguments and beliefs. My assumption turned out to be incredibly wrong. The Opposite of Fate stretches the reader’s emotional imagination in much more profound ways.

The novel opens, not with the horrific attack, but at the moment when Mallie regains consciousness. Part I stays inside Mallie’s mind, as she begins piecing together what happened to her, and inside the minds of her friends and family who are trying to decide what to tell her and just how to tell her. In effect, the reader becomes one with Mallie, learning the facts and the feelings of the past sixteen months just as she does. Part I ends with Mallie opening a box of clippings from the ordeal. While she reads them, so does the reader. McGhee’s technique is masterful, connecting the reader intimately with Mallie’s discoveries.

The rest of the novel continues in the same pattern, moving between Mallie’s increased understanding of the past and her friends’ and family’s alternate sharing and withholding of secrets. Whereas the cover led me to believe the political crisis of her pregnancy would be the focus, instead The Opposite of Fate centers on two things: reactions after the fact and, more importantly, how to move into the future. The reactions include guilt, escape, and overprotectiveness. Some people in the novel can’t let go of the past, can’t let go of their anger or their angst at their culpability. For example, she was waiting to pick up her younger brother when the assault occurred. He was late, and drunk. If only he had been on time, and sober.

But this is a novel looking toward the future. How might Mallie and her brother reconnect? And what might they learn from one another? Can her overprotective guardian set her free? What about her boyfriend? Much to the consternation of everyone, he fled to Montana. Why? The Opposite of Fate seeks answers, not about the politics of abortion as the cover infers, but about how a loving collection of people might lay a violent, impossible past to rest. Mallie and her boyfriend kept a box of fortune cookies collected from various restaurants, unopened, because that made their future full of infinite possibilities. The Opposite of Fate works out those possibilities, moving beyond nightmarish pain to a happier future.

I thought Alison McGhee’s novel was one of the better ones I’ve recently read. It’s certainly provocative. It’s healthy, too, as it pushes and pulls its characters forward in sustainable and beneficial ways. Anyone who has suffered insurmountable pain in his or her life will find solace in The Opposite of Fate. It doesn’t preach, it doesn’t pretend. Rather, it projects. – Ann Ronald

Also available by Alison McGhee: Never Coming Back; Shadow Baby; Tell Me A Tattoo Story; Gink & Gollie; /firefly Hollow; Maybe A Fox; Two for One; What I leave Behind; Rainlight; The Sweetest Witch Around; World So Wide; All Rivers Flow From the Sea; Star Bright; A Very Brave Witch; The Case of the Missing Don’t; Little Boy; Someday; Countdown to Kindergarten; So Many Days; Mrs. Watson Wants Your Teeth; Making a Friend; Julia Gillian; Song of Middle C; Only A Witch Can Fly; Always; Bye-bye, Crib; Snap; Julia Gillian and The Art of Knowing; Julian Gillian and The Dream of The Dog; Was It Beautiful?; Where We Are. 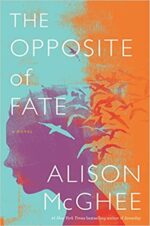 Ann Ronald is a retired English professor from the University of Nevada, Reno. Author of dozens of reviews, she’s also written a number of books about the American West. They include literary studies such as The New West of Edward Abby and Reader of the Purple Sage, cultural studies such as GhostWest and Oh, Give Me a Home, and nature writing such as Earthtones: A Nevada Album. Her latest is a work of fiction, Friendly Fallout 1953. Since retiring, she’s been reading vociferously, so “Bookin’ With Sunny” is giving her a wonderful opportunity to share thoughts about her favorite new discoveries.
More from this reviewer
PrevWonder Dogs
The ExilesNext