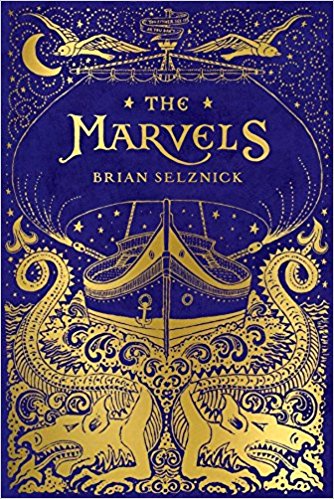 “You either see it or you don’t,” is the motto that binds together the plot of The Marvels. Written and illustrated by Brian Selznick, the story is framed as a novel that includes pictures, rather than a comic book with panels and dialogue bubbles. But fear not! This doesn’t mean there is no wording in the drawings, only that the reader will have to pay close attention to letters, newspaper clippings and the like. Important details woven into the illustrations and the narration make the motto of The Marvels all the more imperative.

Young Joseph Jervis has run away from school to search for his friend, Blink in the hopes that they will be reunited and he will escape the life his parents have laid out for him. He intrudes on the quiet life of his estranged uncle, Albert Nightingale, who initially refuses to do anything but return him to his parents. However, Joseph and his new friend Frankie, make a discovery about Albert’s mysterious life. The pair is determined to get to the bottom of the secrets they believe Albert is keeping from them.

Identity and the discovery of one’s self is the thing that is often not seen by the characters. Why Albert deemed to ‘eccentric’ and abandoned to isolation by his family? Why does Frankie prefer her nickname over her given name, “Francine,” and why does she cut her hair? Why is Joseph desperate to find Blink, when their loyalty to each other means more than familial or school obligations? As the characters investigate these questions and the motivations behind them, the angel in the drawings follows them throughout the novel. This not unlike the Angels and Ghosts from the play, Angels in America. What isn’t immediately clear is revealed over time, much like scrubbing a mirror to see one’s true reflection.

The pencil drawings are all done in black and white, and much of the [illustrated] story is conveyed in the facial expressions of the characters, describing anger, sadness, curiosity, despair, etc., bringing the emotion that can’t always be seen through the narrated text. The drawings also begin and end the story, and having concluded Joseph’s and his family’s quest for self-discovery, bring readers out of the same door they entered the novel through. Only this time, everything makes sense.

Children and adults alike who wrestle with questions of gender identity and self-expression, and who strive to find their place in the world will find something of themselves in this book. Those who have felt the pain of isolation or loss will also find this book a great comfort. And anyone who has survived the AIDS epidemic (or their families) will find this book a great respect to their memory.   – Brandy Burgess

Also by Brian Selznick: The Invention of Hugo Cabret, Wonderstruck 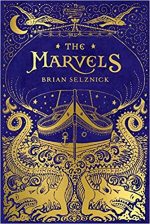 Brandy Burgess holds a BS in Speech Pathology from the University of Nevada, Reno. She was born in Arkansas and grew up living there and parts of the east coast before moving to Las Vegas, Nevada in 1997. She works as a freelance writer, and moonlights as the creative muse behind BrandyDanielle.com. She is currently writing for ComicBookDebate. Brandy resides in downtown Reno, Nevada.
More from this reviewer
PrevZora & Me, The Cursed Ground
How It All BeganNext