The Man Who Loved Books Too Much 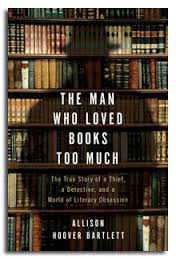 The Man Who Loved Books Too Much: The True Story of a Thief, a Detective, and a World of Literary Obsession

Soon after I learned to read, I became obsessed with books—with reading them, checking them out of libraries (school and public), and buying them. I did not and have not stolen any, yet. There have been many over the years that I have lusted over such as chained books in the Bodleian or any of William Morris’s Kelmscott books that I saw and held in a private library in California. After reading Bartlett’s The Man Who Loved Books too Much, I realize that my obsession has been like puppy love, unconsummated and relatively harmless. I’m just a wannabe. Although this confession is difficult for me to air publicly, I feel some relief when I think that I could have turned out to be like John Gilkey, a felon of rare books. There but for the grace of fear go I.

If The Man Who Loved Books too Much were just about John Charles Gilkey’s bookish larcenies, it would still have been an intriguing story. Thievery, however, is just one of Bartlett’s many themes. Another concerns an unlikely, obsessive book detective. Yet a third is Bartlett’s own slowly growing obsession with rare books. Finally, there are Bartlett’s ideas about obsession itself. It’s not an exaggeration to suggest that The Man Who Loved Books Too Much is a meditation on obsession and its relationship to love.

Gilkey has been in and out of prison numerous times, a price he seems willing to pay for the privilege of liberating books from those, in his estimation, who own but don’t deserve them. His prison sentences have usually been short, typically one to three years. Bartlett, having discovered Gilkey’s existence from a self-styled “bibliodick” at a rare book fair, decided to find Gilkey and interview him if amenable. She discovered him in a California prison; she wrote and then visited him there. Thus began a relationship both in and out of prison extending over several years. By incorporating his story into this book, Bartlett gave Gilkey a certain celebrity status that he seemed to relish almost as much as stealing rare books.

Gilkey looked normal even in prison uniform. A white man in his late thirties, of medium height and build, Gilkey’s voice sounded a bit like Mr. Rogers to the author. There the resemblance stopped. His grandiosity lay just below his surface charm. Gilkey’s thievery started young, although rare books came later. His parents knew but seemed not to disapprove of his early shoplifting activities. Later, he recruited his father to help him steal books. The first important collectible book that he “acquired” was a first edition Lolita. He pinched it not for its prurient interest but because of its notoriety and his fantasy that he could impress others with it–once he had established a large library of purloined livres in a grand house. For Gilkey, books are desirable not for what they contain but what they stand for. They are a way to gain status, respectability, and to inflate his self-importance. (Add delusional to grandiose.) I am using the present tense because Gilkey, at last report, is out and about after being released from prison again in 2011—and still presumably stealing books.

Before reading this book, I had never given a second’s thought to stealing rare books. Car theft, art theft, identity theft., embezzlement? Sure. But stealing rare books? How do you steal a rare book? John Gilkey used ingenious methods to detach owners from their treasures, none of which involved breaking and entering or mugging rare book owners on lonely streets after dark. “Your rare book or your life?” Hardly. If you are at all curious about how to steal a $10,000 rare book, read The Man Who Loved Books Too Much.   – Neal Ferguson 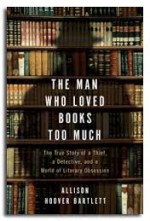 Neal Ferguson is a self described Anglo-phile. After studying for a PhD in British history and doing research for a year in various British archives, he came to the University of Nevada in 1970 to teach. Soon he found himself in administration where he remained until 2003. After returning to full-time teaching a decade ago, he decided to concentrate his teaching energies on Medieval British history and various global aspects of World War II. Dedicated to Ambrose Bierce’s proclamation that the purpose of war is to teach Americans geography, Neal insists that his students accompany him (in class) to sundry east European rivers and steppes, African deserts and jungles, south-east Asian mountain ranges and peninsulas, and small islands and coral reefs in the Pacific. Currently he is writing a book about the ups and downs of General Douglas MacArthur’s military reputation.
More from this reviewer
PrevThe Crimson Rooms
The Immortal Life of Henrietta LacksNext