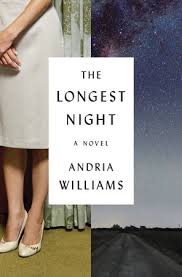 As the wife of an active-duty naval officer, Andria Williams recognizes the range of difficulties that can be encountered by military spouses. In her first novel, The Longest Night, Williams transfers that intimate knowledge to a more distant past, writing about an Army husband deployed to Idaho Falls in 1959. Accompanying Paul is his wife, Nat, and their two daughters. Uprooted, isolated, spending all of her waking hours with two little girls under the age of three, Nat encounters a loneliness that directs her, not toward tragic mistakes, but toward errors in judgment, the kinds of lapses any inexperienced young woman might make, the kinds of ill-conceived decisions a spouse might misunderstand.

To compound matters, Nat’s husband, Paul, soon realizes that his job at a nuclear reactor testing station is more dangerous than he expected. His boss, lazy and inconsiderate, is covering up serious safety issues at CR-1. So Paul must struggle with his own conscience and with his growing distrust of the incompetent master sergeant who is covering up some potentially fatal problems. Because he is a military man, however, trained to keep military secrets at all costs, Paul hides his concerns from his wife. The tension between them escalates, as the two struggle individually, finding themselves unable to converse with each other in any meaningful way.

Essentially, then, The Longest Night is a novel of marital disquiet, but with the added ingredient of Cold War military assurances and failures. Williams’ fiction is based on fact. A nuclear accident did indeed occur outside Idaho Falls in 1961, a mysterious mishap that the government has never fully explained. Williams’ characters, on the other hand, are wholly imaginary. Yet their plights are plausibly rendered; Nat, alone with too much time on her hands and too little communication from her taciturn husband; and Paul, alone in his own imagination, troubled by work issues and tormented by his marital misperceptions.

Surrounding this couple are other Army enlisted men and their wives, each with his or her own set of expectations. Webb is boyishly innocent; Deke Harbaugh, dying of what a twenty-first century reader will recognize as emphysema caused by years of working with insulation; Mitch Richards, the careless supervisor who cares more for his career than for the safety of his men. Mitch’s wife Jeannie, who constantly worries about appearances and who perhaps drinks more than she should; Patrice, Nat’s fair-weather friend with a shallow outlook on life. These characters come from a generation quite close to my own, so—I confess—I read The Longest Night with a bit of trepidation. There but for the grace of . . .

Actually, I think readers of every age group will enjoy this novel. Its themes are readily apparent, but depicted in subtle and convincing ways. These characters are very real, and their problems worth weighing. Besides, Williams writes well. Her rendering of a mid-twentieth century Idaho landscape, often cold and isolated, where military families are deposited unceremoniously into the midst of an unfamiliar Mormon milieu, seems quite realistic to me. As I read The Longest Night, I did want to shake some sense into the characters. But that’s the mark of an effective novel, isn’t it? The people seem real, and the reader wants them to stop and talk to one another, to stop making so many foolish blunders. Williams has them under control, but they themselves seemed sadly misguided. – Ann Ronald 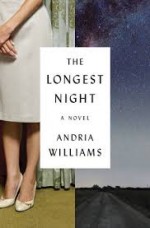 Ann Ronald is a retired English professor from the University of Nevada, Reno. Author of dozens of reviews, she’s also written a number of books about the American West. They include literary studies such as The New West of Edward Abby and Reader of the Purple Sage, cultural studies such as GhostWest and Oh, Give Me a Home, and nature writing such as Earthtones: A Nevada Album. Her latest is a work of fiction, Friendly Fallout 1953. Since retiring, she’s been reading vociferously, so “Bookin’ With Sunny” is giving her a wonderful opportunity to share thoughts about her favorite new discoveries.
More from this reviewer
PrevFriday’s Harbor
The Interpretation of MurderNext