Home » Reviews » The Heron’s Cry, sequel to The Long Call

The Heron’s Cry, sequel to The Long Call 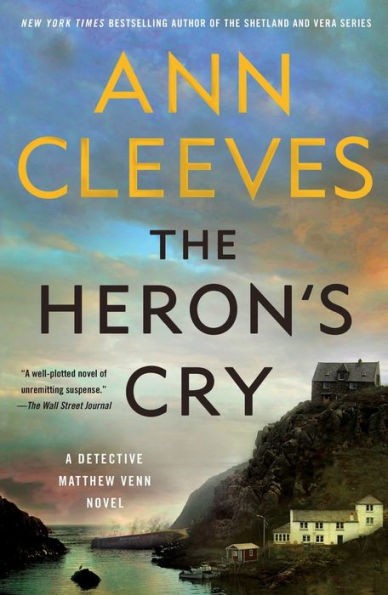 The Heron’s Cry, sequel to The Long Call. Cleeves and her detective Venn have done it again in the second Two Rivers mystery.

As promised, Ann Cleeves has published a second Two Rivers/Matthew Venn mystery set in befogged North Devon, where the river Taw converges with the Torridge. I described the first one, The Long Call, as “a novel layered with secrets and complicated connections.” The same must be said about the second, The Heron’s Cry. In its pages, too, family paradoxes shadow enigmatic comings and goings. No one is innocent, it seems, and the surprising solution to multiple murders turns out to be motivated by an encrusted familial past.

Once again, in The Heron’s Cry, Cleeves introduces a cast of misfits and artists, some men and women firmly entrenched in reality and others captured by internet magnets that drive their actions. That’s one of the pleasures of Cleeves’ Two Rivers series, the balanced juxtaposition between its ancient British setting and its modern English plotting.

Like its predecessor, The Heron’s Cry is a police procedural with brains, with sensitivity, with shrewd plotting, and with creative ratiocination both logical and intuitive. If you enjoyed Detective Matthew Venn and his fellow investigators in The Long Call, you’ll love how their teamwork comes together to solve the puzzle of The Heron’s Cry.

In the first chapter of Ann Cleeves’s North Devon murder mystery, The Long Call, Detective Matthew Venn hurries toward a corpse that has been found on the Atlantic shore. Driving on an access road with his car window rolled down, he breathes in the damp ocean air and listens: “now he could hear the surf on the beach and the cry of a herring gull, the sound naturalists named the long call, the cry which always sounded to him like an inarticulate howl of pain.” The pages of Cleeves’s gripping novel articulate that very sound. Many of her characters cannot or will not express themselves. Rather, they agonize internally and remain tongue-tied as the murder investigation progresses. Getting each of them past his or her long call is key to Matthew’s job.

The corpse turns out to be a troubled man who drank too much and who was seeking help from a drop-in addiction center at nearby St. Cuthbert’s church. A tenant of the woman who runs the facility, he also was a volunteer cook at the Woodyard, a local community hub. Simon Walden had been a successful chef before tragedy changed the trajectory of his life. It appeared he was putting the pieces back together until murder intervened. Now Matthew and his team must trace Walden’s movements, his contacts, his past, and his present in order to understand why his future was cut short.

The day after the discovery of the murdered man’s body, a parallel mystery unfolds. One of the Woodyard tenants is a daycare center for Downs Syndrome adults, mostly women, who help out in the cafeteria where Simon Walden oversaw the food preparation. One woman has gone missing, and her mother is frantic. Are the two cases related? Matthew finds the coincidence implausible on the surface, but he is nonetheless suspicious. Now the police have two urgent cases—find the murderer and find Christine Shapland.

These are the two most important procedural storylines in The Long Call. There are emotional complexities, too. Matthew grew up in North Devon, and his long-estranged mother is a good friend of Christine’s mother. He, in fact, knew Christine when he was a boy. After years away, he has returned to work in a place he once fled. Another complication is the fact that his spouse runs the Woodyard. Perhaps Matthew should recuse himself from the investigation? Not likely. His DCI drinks too much; Matthew was hired to do what DCI Oldham is no longer capable of doing. And he must do so with the help of a team that isn’t always helpful.

If all this seems overly complicated, there’s more, for this is a novel layered with secrets and complicated connections. Ann Cleeves writes with such logical continuity, however, that the plot twists are clear and understandable. Her previous fiction includes eight mysteries in the Vera Stanhope Series and eight in the Shetland Series. The Long Call is the first to feature Detective Matthew Venn in what Cleeves is calling the Two Rivers Series. I have always been a fan of her mysteries. Intricately plotted, well-reasoned, and well-written, they also communicate a sense of place that brings villages, marshes, and sand dunes to life. It’s almost as if the reader were on holiday in Northumberland, The Shetland Islands, and now in North Devon, where the river Taw converges with the Torridge. – Ann Ronald

Also available by Ann Cleeves: Raven Black; The Darkest Evening; White Nights: Red Bones; Dead Water; Wild Fire; Blue Lightning; The Crow Trap; Cold Earth; Harbour Street; The Seagull; Silent Voices; The Moth Catcher; Shetland; Hidden Depths; Telling Tales; A Bird in the Hand; The Sleeping and the Dead; A Lesson in Dying; A Day in the Death of Dorothea Cassidy; Burial of Ghosts; Killjoy; The Baby-Snatcher; Murder in Paradise; Come Death and High Water; The Healers; Sea Fever; Frozen; A Prey to Murder; High Island Blues; The Mill on the Shore; Another Man’s Poison; The Starlings and Other Stories; Dreaming of Rain and Peter Lovesey. 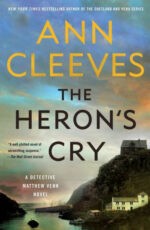 Ann Ronald is a retired English professor from the University of Nevada, Reno. Author of dozens of reviews, she’s also written a number of books about the American West. They include literary studies such as The New West of Edward Abby and Reader of the Purple Sage, cultural studies such as GhostWest and Oh, Give Me a Home, and nature writing such as Earthtones: A Nevada Album. Her latest is a work of fiction, Friendly Fallout 1953. Since retiring, she’s been reading vociferously, so “Bookin’ With Sunny” is giving her a wonderful opportunity to share thoughts about her favorite new discoveries.
More from this reviewer
PrevA Tale of Two Murders
The Last Days of NightNext