The Grande Dame and Hitler’s Twin 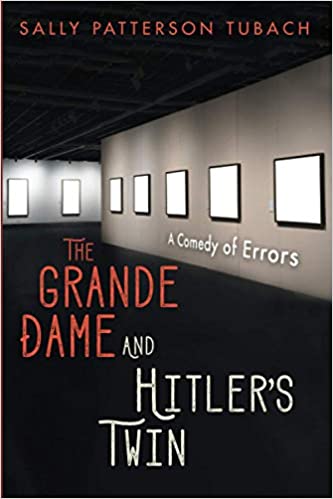 The Grande Dame and Hitler’s Twin

A Comedy of Errors and more.

Sally Patterson Tubach subtitled her novel “A Comedy of Errors.” In truth, The Grande Dame and Hitler’s Twin is a hilarity of errors, a madcap romp conducted by countless eccentric and egocentric characters. All the while, they’re capering through a sea of allusions—to music, to the visual arts, and, most of all, to literature. Widely educated readers will be thoroughly amused by Tubach’s concoction, will love to join this bizarre array of men and women and to puzzle through the esoteric hints that appear on nearly every page.

The Grande Dame and Hitler’s Twin actually divides itself into two distinct sections. The first features Myrtle Halstead, an elderly well-to-do woman who has recently moved into an elite San Francisco retirement high rise. The second focuses on Jean-Louis Lamour, a fictional twin of Adolf Hitler, who languished in glacial ice for generations until his cold, perfectly-preserved body is found, thawed, and resuscitated. The connective tissue between Myrtle and Jean-Louis is Bruno de Carlo, an Italian American who buys Myrtle’s Russian Hill residence and who, decades later, is tasked by the CIA to look after the unacknowledged twin. Bruno’s partner, an East German named Hermann Wittgenstein, plays an overarching role, too, first as Myrtle and Bruno’s handyman, later as an overseer of Jean-Louis.

And these four characters are only the tip of the iceberg! Their adventures are accompanied by a host of extraordinary individuals. Tubach has a genuine knack for zeroing on what is unique about a person. As I read, I was reminded of what I once learned about Charles Dickens and what are labeled his “grotesques.” When he met someone, he would often center his attention on a single feature—eyebrows, hairstyle, a bloated stomach, an awkward posture—until that someone actually became that feature in Dickens’ imagination. That’s how he created his odd and “grotesque” characters. Think plumping up the old grandfather Smallweed, for example, or Miss Havisham in her tattered gown. That is how Tubach individualizes her peculiar characters, too, by isolating one or two traits that before long actually become the person him or herself.

Jack Peterson, for example, another elderly resident who, inspired by Myrtle and a Thomas Mann book club conversation, writes his own bestsellers, beginning with Resurrection in Venice. His popular but shallow books are based on what he can spy through a telescope set up on his apartment balcony.  Then there is Crystal Beatty, a wealthy heiress who romantically pursues Bruno for decades, through the grande dame pages and on into the Hitler’s twin pages, her unkempt hair continuously wafting in the wind. Black Donald, drug dealer and chauffeur and man of all traits. Gloria Majestic, the ever-helpful television personality who grows enamored of the elderly retirement community residents. Or Latrone Sanders, the neurotic CIA agent whose anxiety about flying and boating makes trailing Jean-Louis a task fraught with fear. That his mother was Myrtle’s favorite nurse adds another twist to the plot.

Well, you get the idea. These are not your ordinary people populating an everyday comedy of errors. And I haven’t even touched on the hilariously convoluted plot with its countless artistic allusions, the mistaken identities, the unexpected storyline twists, the implausible encounters. I read this book and constantly shook my head at its madness. But I did so with a smile on my face. So I recommend The Grande Dame and Hitler’s Twin to those readers who enjoy a good laugh. And who relish solving literary, musical, and artistic puzzles. And who want to savor a book that’s just plain fun.  – Ann Ronald 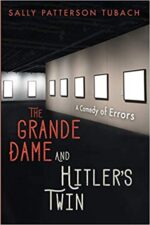 Ann Ronald is a retired English professor from the University of Nevada, Reno. Author of dozens of reviews, she’s also written a number of books about the American West. They include literary studies such as The New West of Edward Abby and Reader of the Purple Sage, cultural studies such as GhostWest and Oh, Give Me a Home, and nature writing such as Earthtones: A Nevada Album. Her latest is a work of fiction, Friendly Fallout 1953. Since retiring, she’s been reading vociferously, so “Bookin’ With Sunny” is giving her a wonderful opportunity to share thoughts about her favorite new discoveries.
More from this reviewer
PrevFacing the Wave
Grim HoneyNext