Home » Reviews » Fiction » The Gift of Rain – an outpouring of remembrances

The Gift of Rain – an outpouring of remembrances 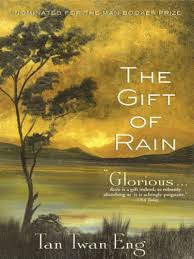 The Gift of Rain

The year is 1995. An elegant but frail seventy-five year-old Japanese woman, Murakami Michiko, knocks on the door of Philip Hutton’s family mansion on Penang Island, part of Malaya. Michiko is in search of anything Philip may tell her about the death fifty years ago of his former teacher and her soul mate. Within a few minutes, Philip, now seventy-two, is propelled backwards into memories, many of which are half forgotten, half hidden, and mostly unwanted. They lead him to examine with increasing honesty his life-long ambivalences and the ambiguous impacts of his life on others.

Over some days, he recounts to Michiko his recollections from the summer of 1939, the pivotal summer of his adolescence, perhaps of his life. He has been left home alone. His wealthy father and three siblings have taken a steamer from Penang Island to London for five months. (His mother died when he was six.) He is left with the servants in the family’s palatial digs. What might he do? That question is not answered since Tan Twan Eng in this historical novel, The Gift of Rain, is interested in a more existential question: what kind of  man shall Phillip become?

Before Phillip can make definitive plans, a stranger, a Japanese gentleman twenty-five years Philip’s senior, named Hayato Endo, knocks on his door and asks to borrow a boat. His has been blown away. Endo has rented the island from Phillip’s father Noel and has built a Japanese-style cottage on it. He needs a boat to reach his island abode, a mile distant.

The island has long been Phillip’s special place, a boyhood hideout, a place to escape from his very English family. His normal adolescent search for identity and place is complicated by his being only half English. His mother came from a wealthy Chinese clan in Malaya. Since his English and Chinese families are estranged, Phillip feels as if he belongs nowhere except on his island. Now, it has been taken from him.

The Gift of Rain is not, however, a conventional coming-of-age story that happens to be set in the exotic Malacca Strait. Philip’s coming-of-age is guided by Endo-san who encourages Philip to study all things Japanese: language, calligraphy, culture, meditation, and martial arts–especially martial arts. Endo-san becomes his sensei (teacher) and takes Phillip’s physical, cultural, and ethical education as a personal challenge. Philip is an exceptionally adept student. With increasing awareness, however, Phillip realizes that he is being suspended between East and West, between free will and fate, and between duty to self, family, and nation. His and his family’s future may well be determined by his success in reconciling these contradictions within himself and by, of necessity, taking some frightening risks.

And then World War II comes to Malaya. The British colonial hegemony, of which Phillip is a part. however unwillingly, crashes under the force of the Japanese military. Philip’s ambivalences and ambiguities erupt volcanically.

Fast-forward to 1995, the fiftieth anniversary of the end of Japan’s occupation of Malaya. Memories flood into consciousness, of loyalty and betrayal, of courage and cowardice, and of love and hate. Exploring the adequacy, transiency, and meaning of memories is central to Eng’s novel. Michiko and Philip both come to a deeper understanding of their complicated relationships with Endo-san even as their lives wane: “What is the heart’s memory but love itself?” Lyrically written and beautifully evocative, Eng’s writing aches with the poignancy of loss and regret but clings to the possibility of a more tranquil future.

I didn’t read this book so much as let it wash over me. Having been doused by The Gift of Rain, Malaysia is now on my travel list. – Neal Ferguson 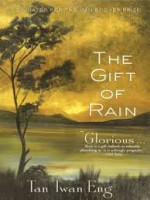 Neal Ferguson is a self described Anglo-phile. After studying for a PhD in British history and doing research for a year in various British archives, he came to the University of Nevada in 1970 to teach. Soon he found himself in administration where he remained until 2003. After returning to full-time teaching a decade ago, he decided to concentrate his teaching energies on Medieval British history and various global aspects of World War II. Dedicated to Ambrose Bierce’s proclamation that the purpose of war is to teach Americans geography, Neal insists that his students accompany him (in class) to sundry east European rivers and steppes, African deserts and jungles, south-east Asian mountain ranges and peninsulas, and small islands and coral reefs in the Pacific. Currently he is writing a book about the ups and downs of General Douglas MacArthur’s military reputation.
More from this reviewer
PrevThe Fly Trap
Murder on the Last FrontierNext