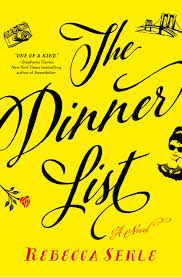 Imagine deciding which five people you would like to invite to dinner ten years from now. Anyone will do, whether you know them personally or not—friends, relatives, loves, historical figures, the rich and famous. Sabrina Nielsen’s list, created when she was in college, originally included Plato, though she modified the names as time passed. Imagine her surprise, however, when she goes to a restaurant to celebrate her thirtieth birthday and discovers her dinner list already seated at the table. Such is the set-up of Rebecca Serle’s novel, The Dinner List, a clever arrangement that throws three women and three men into imposed intimacy, an evening of food and drink but also tense conversations and raw feelings exposed.

Sabrina’s dinner list includes her college roommate, Jessica, who originally urged the creation of this fantasy. Once the closest of friends, the two have grown apart now that Jessica has married, moved to the suburbs and started a family, while Sabrina has remained in New York, a single woman pursuing her editing and publishing career. Seated next to Jessica is Robert, Sabrina’s long-estranged father who abandoned his wife and daughter when Sabrina was a little girl. Alongside Robert is Audrey Hepburn, who starred in his favorite film, “Sabrina.” Both Robert and Audrey are deceased, yet the two of them look and act perfectly normal.

Next is Professor Conrad, a college role model for both Jessica and Sabrina, and a man who will be a voice of wisdom and prudence throughout the evening. Tobias, the love of Sabrina’s life, sits to the left of Professor Conrad. For nearly ten years Tobias and Sabrina passionately pursued a relationship filled with ups and downs. She hasn’t seen him for months; they no longer date nor do they ever plan to reconnect. The empty chair beside Tobias is for Sabrina, with Jessica seated at the round table on Sabrina’s other side.

And so the evening uncomfortably begins, with drinks and appetizers and awkward, shallow conversations. Serle doesn’t let her characters remain superficial for long, however. Soon their talk turns to intimate matters, unresolved moments of crisis and love. To her credit, Serle also doesn’t let the difficult exchanges turn offensive or nasty. Rather, Sabrina and her tablemates honestly begin to share how and why their various precarious relationships went awry. Parallels between their individual failures are soon apparent, as are the echoes of various Audrey Hepburn films—“Sabrina,” “Breakfast at Tiffany’s,” “My Fair Lady.” A reader who recognizes Hepburn’s recurrent themes will find even more depth in Serle’s novel.

Serle expertly draws her characters out and lets them explore their previous mistakes in meaningful ways. She does so in alternating chapters of dinner party conversation and then step by step remembrances of Sabrina and Tobias’s romantic years together. The conversations and the recollections have a common thread, Sabrina’s personal point of view. The dinner list, after all, is all about her, about how she felt abandoned when her father left, about how she has always held her friends and lovers at arm’s length, distancing herself from true intimacy, fearing more devastating desolation. Serle succeeds admirably in making The Dinner List a penetrating psychological study of Sabrina’s issues, but she does so with warmth and with love. Thematically, she could have written a heart-wrenching novel. Instead, Serle has written a heart-warming one that will leave readers thinking about their own dinner lists, their own unspoken conversations. – Ann Ronald

Also available by Rebecca Serle: Famous in Love; Truly Madly Famously; The Edge of Falling; When You Were Mine. 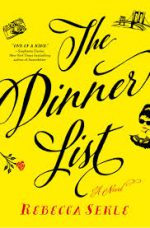 Ann Ronald is a retired English professor from the University of Nevada, Reno. Author of dozens of reviews, she’s also written a number of books about the American West. They include literary studies such as The New West of Edward Abby and Reader of the Purple Sage, cultural studies such as GhostWest and Oh, Give Me a Home, and nature writing such as Earthtones: A Nevada Album. Her latest is a work of fiction, Friendly Fallout 1953. Since retiring, she’s been reading vociferously, so “Bookin’ With Sunny” is giving her a wonderful opportunity to share thoughts about her favorite new discoveries.
More from this reviewer
PrevOur Souls at Night
Angle of ReposeNext