Home » Reviews » Fiction » The Boy in the Suitcase

The Boy in the Suitcase 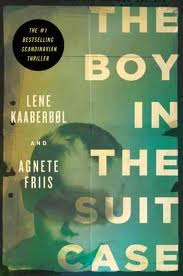 Let me begin this review with a glittering generality. I find contemporary Scandinavian murder mysteries to be graphic, violent, unsettling, and almost off-putting. I try not to read them. But when I pick one up, I turn the pages almost non-stop until the end. I stay awake past midnight, urgently finishing the book. So it was with The Boy in the Suitcase, written by the duo of Lene Kaaberbol and Agnete Friis.

This Danish novel is the first of a series with an unlikely and totally unique primary character, a Red Cross nurse. The dust jacket calls Nina Borg a “compulsive do-gooder,” but after reading The Boy in the Suitcase I would describe her somewhat differently. Once the book’s puzzles have been resolved and the non-stop action has quieted down, the narrative flashes back to Nina’s girlhood. The reader learns a piece of her past that goes a long way toward explaining the odd choices she has been making throughout the preceding pages. All along, I had been coaching from the sidelines, urging this character to make good decisions, not bad. But Nina is a prisoner of her past, programmed at an early age to act and react in illogical ways.

She is introduced to the reader when a friend asks her to pick up a suitcase from a storage locker in a Copenhagen train station. She does so, and then she looks inside. She finds a little boy, naked, unconscious and apparently drugged. Instinctively, she thinks of contacting the police, and then, just as instinctively, she decides to solve the conundrum herself. The steps she takes are peculiar, to say the least. Instead of going home to her husband and family, she spends the night in her car with the boy. When she discovers he speaks a European language other than Danish, she hires a Lithuanian prostitute to talk with her new-found charge. Every time she has an opportunity to consult authorities, she finds a reason not to do so.

Scenes of duress and mayhem recur over and over again in The Boy in the Suitcase, and Nina manages to escape from several ugly scenes. At the same time Nina and the little boy, Mikas, are trying to solve the mystery of his past, the stories of other characters are converging. Mikas’s mother is desperately trying to find her missing son. And the men involved in his kidnapping are trying to find not only the boy but a large sum of money missing from the storage locker. All this action seems quite straight-forward, yet when the novel ends the denouement is quite surprising. And quite satisfying, too. I like mysteries where the ending makes a kind of logical sense. And despite Nina’s illogical behavior, the ultimate story line of The Boy in the Suitcase is absolutely coherent. Even the senseless violence makes a kind of sense, given the labyrinth of events that unfold.

I understand that novels of this sort are often described a “Nordic Noir.” Stieg Larrson’s Swedish trilogy and Yrsa Siggurdardottir’s dark Icelandic thrillers are among the most popular. I have to confess that, with clammy hands and pounding heart, I continue to pick them off the bookstore shelves. And stay up late, unable to stop reading until the bitter end, as I did with The Boy in the Suitcase.                       – Ann Ronald 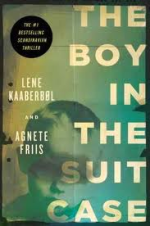 Ann Ronald is a retired English professor from the University of Nevada, Reno. Author of dozens of reviews, she’s also written a number of books about the American West. They include literary studies such as The New West of Edward Abby and Reader of the Purple Sage, cultural studies such as GhostWest and Oh, Give Me a Home, and nature writing such as Earthtones: A Nevada Album. Her latest is a work of fiction, Friendly Fallout 1953. Since retiring, she’s been reading vociferously, so “Bookin’ With Sunny” is giving her a wonderful opportunity to share thoughts about her favorite new discoveries.
More from this reviewer
PrevSun Going Down
The House on Mango StreetNext