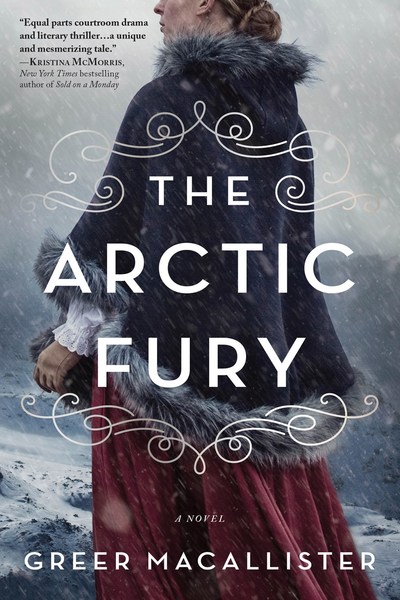 The Arctic Fury – Greer Macallister’s historical novel calls for a willing suspension of disbelief, historical fiction at its best.

Greer Macallister based her novel, The Arctic Fury, on a most unlikely premise, one that necessarily calls for a willing suspension of disbelief.’ Once I bought into her set-up, however, I was totally intrigued by her originality, her nuances, and her perceptive analyses of character. The Arctic Fury is historical fiction, with an emphasis on fiction, at its best.

Lady Jane Franklin’s husband, Sir John Franklin, disappeared while searching for the mythical Northwest Passage. Obsessed by his disappearance, she sponsored seven expeditions to search for the remains of his party. This is fact. Macallister introduces a parallel fiction, imagining Lady Franklin as the sponsor of yet another foray into the arctic, this one comprised of all female members who are sent off under cryptic and rather mysterious circumstances. Amateur expedition? All women? ‘Willing suspension!’

Lady Franklin hires a notable guide for this enterprise. Virginia Reeve, nee Reed, has been guiding pioneers and gold seekers across the Sierra Nevada mountains. Although she has no experience in the far north, Virginia has both the leadership and the wilderness skills that an arctic expedition needs. After convincing Virginia of the efficacy of her plans, Lady Franklin hands her a list of would-be companions, then hands her over to a taciturn man who will organize the expedition’s logistics.

The list of women who will accompany Virginia is interesting in its own right. Macallister explains in an end note that each was based on a real-life mid-nineteenth-century woman. Macallister’s women are fictional, but each closely resembles someone who had a similar talent or skill that would be useful in the arctic. For example, one was a world-renowned mountain climber of some repute. Another, a woman who was widely recognized as a talented wartime nurse. A third, a journalist who had been working for Ralph Waldo Emerson (she’s the only prototype I guessed). Others include a transgender woman who had surreptitiously studied to be a doctor, a female cartographer, a Minnesota woman who raised sled dogs, a botanical illustrator, a multi-lingual translator. Twelve women accompanied Virginia; not all of them survived.

This is the second provocative issue of The Arctic Fury. When the mountain climber doesn’t return, her wealthy family accuses Virginia of murder. The Collinses aren’t interested in any of the other women who were lost on the expedition, but they haul Virginia into court to punish her for the untimely death of their beloved daughter. Macallister chooses to tell Virginia’s story in parallel. Chapters relating testimony at Virginia’s trial and her experiences in prison alternate with events setting up the expedition and then scenes from the expedition itself. The trial is seen only through Virginia’s eyes, and much of the northern trek is filtered by her as well. But Macallister includes chapters envisioned by each of the other women, too, which heightens the anguish and the tensions of their ordeal.

Here is where Macallister excels. She is masterful at expressing female interaction in times of stress and strain. Her characters, I thought, were pitch perfect. Never overdrawn, but subtly nuanced. Macallister also manages to extend the topic of female emancipation (or non-emancipation, as the case may be) throughout The Arctic Fury. Again, with finesse, but always with an eye on the difficulties of being a nineteenth-century female—in polite society, in the wilderness, in moments of extreme duress. Macallister muses about the women’s relationships with men, too, men they love and men they loathe.

I’ve written this whole review without saying a word about the expedition itself. That’s appropriate, in that another strength of The Arctic Fury is the way its drama unfolds. Since Virginia’s trial is filled with lies and innuendo, the reader must wait for the final trekking chapters to find out what really happened when the fury of the arctic clashes with ‘the arctic fury’ (Virginia’s nickname, awarded for reasons a reader will come to understand). A double entendre title, one that rightly acclaims a triple whammy novel. – Ann Ronald 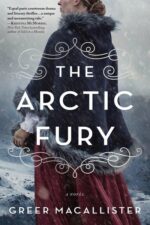 Ann Ronald is a retired English professor from the University of Nevada, Reno. Author of dozens of reviews, she’s also written a number of books about the American West. They include literary studies such as The New West of Edward Abby and Reader of the Purple Sage, cultural studies such as GhostWest and Oh, Give Me a Home, and nature writing such as Earthtones: A Nevada Album. Her latest is a work of fiction, Friendly Fallout 1953. Since retiring, she’s been reading vociferously, so “Bookin’ With Sunny” is giving her a wonderful opportunity to share thoughts about her favorite new discoveries.
More from this reviewer
PrevThe Light of Evening, A Brief Life of Jack Foley
The Last Train to LondonNext