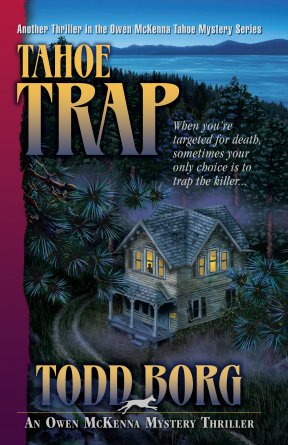 Summer’s not over yet. There’s still time to read another Todd Borg mystery thriller. And just in time, Borg’s latest, Tahoe Trap, is now on the shelf of your favorite bookstore, brick-and-mortar or virtual. Not only is Lake Tahoe as amazing as ever, so too, is the high altitude sleuthing of ex-SFPD detective Owen McKenna, who works as a force of his own.

By page three of the Prologue, ten-year-old Paco Ipar has witnessed the shooting of his foster-mother. Not content with one murder, the killers now go after Paco. Terrified and armed only with his foster-mother’s cell phone, Paco auto dials Owen McKenna. So begins a most perplexing case of murder and terror. Who is this boy and why was his foster mother killed? And why do the killers want him so badly?

What makes Todd Borg’s books so much fun is that he doesn’t much care to follow the rules when it comes to writing mystery-thrillers. Well, yes, we’ve got a dead body early on, but forty-seven pages later, we’ve already got the identity of the killers. Okay, the killers are not in custody, but the mystery part of the equation has been at least partially met. The rest of the book, who’s hired the killers and why, is pure thriller, Todd Borg style.

Paco Ipar is an illegal alien, born in Mexico and brought to the States by his mother who dies while he is still young. “It takes a village” becomes a reality when the farm community outside of Stockton absorbs Paco as one of their own. At eight or nine, he is adopted by Cassie, an organic vegetable farmer who sells her produce to stores and at farmer’s markets. Her death takes place somewhere not far from the summer farmer’s market location at South Lake Tahoe. It is not summer. Paco, asleep in the back of Cassie’s van, doesn’t know who she was meeting or why.

From the moment that Owen McKenna first hears the terrified boy on the cell phone, he instinctively believes the boy’s story, which means he has virtually no information, other than the two killers are described as “superheros.” The boy elaborates to include the words “big” and “muscles” and that one of the men wore a cape.

McKenna, with help from the myriad of police forces in and around the Tahoe area, is finally able to fill in some very sketchy facts, none of which clearly point to a reason for the killers’ hunt for Cassie or the boy. How could selling baskets of hand-picked organic vegetables year round to some of Lake Tahoe’s wealthiest residents be a cause for murder?

With no home to return to, Paco remains with McKenna and Spot, McKenna’s Great Dane. If you are new to these mysteries, trust me: Spot is another great reason to become a fan. The facts of this case are as slow to appear as the chase for the boy is frighteningly fast-paced. In desperation, McKenna sets a trap, with Paco as the bait. And it almost works. The impending catastrophe (a necessary ingredient of any good thriller mystery) takes a sudden twist and the reader, as well as young Paco, has one more hair-raising episode before the story ends.

Tahoe Trap is a cornucopia of back stories that spill out before the mystery is truly solved. In the interim, the reader is brought up to speed on immigration issues, organic gardening hot enough to blind you, ants with deadly stings, a terrific primer on the Basque immigrants of California and Nevada, and the importance of genetic compatibility.

Borg’s use of Tahoe as a setting is pure genius. It is a microcosm of beauty, wealth, nature, sports, gambling, the arts – the perfect place to “get away from it all,” only to find that the “all” is there, too.        -s.s. 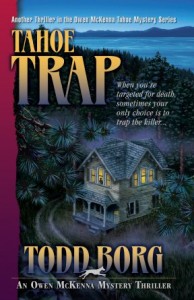 Sunny Solomon holds an MA in English/Creative Writing, San Francisco State University. She is a book reviewer for “The Clayton Pioneer” and her poetry and other writing has been published in literary journals, one chapbook, In the Company of Hope and the collection, Six Poets Sixty-six Poems. She was the happy manager of Bonanza Books, Clayton, CA and Clayton Books, Clayton, CA. She continues to moderate a thriving book club that survived the closure of the store from which it began. Sunny currently lives next to the Truckee in Reno, NV.
More from this reviewer
PrevSilver: Return to Treasure Island
Next to LoveNext